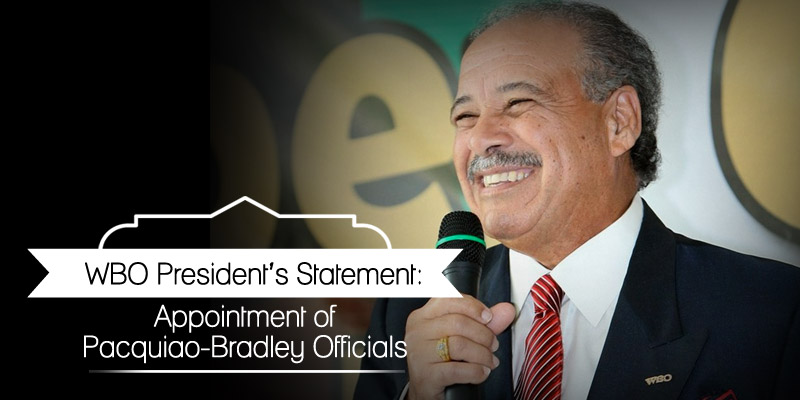 WBO President’s Statement on the Apppointment of Pacquiao-Bradley Officials “I understand that the Nevada State Athletic Commission made a great effort to ensure that boxing fans have confidence in the professionalism of the fight officials and in also adopting our recommendation that officials of diverse backgrounds be chosen. This [Pacquiao-Bradley fight] is a highly anticipated rematch and could potentially be a candidate for Fight of the Year,” said Valcarcel, who will also be the WBO supervisor for the contest. “Once again, I want to congratulate the Nevada State Athletic Commission for their efforts.”

Following the result, which was met with public outcry, and at the request of the Pacquiao camp, the WBO made the decision to review the verdict of the fight and designated a panel of five independent international judges, who collectively scored the fight for Pacquiao.

“We did not order rematch at the time, because it was already contemplated in the fight contracts. Fight fans finally get the chance see it happen,” added Valcarcel.
For this time the only Nevada state judge is Glenn Trowbridge, with Michael Pernick and John Keane being from Florida and the United Kingdom respectively.

“I cannot attest to the work of John Keane, as he is not a member of the WBO, but the reports look satisfactory”, Valcarcel said of the British judge.

The referee of this fight will be Nevada’s Kenny Bayless.