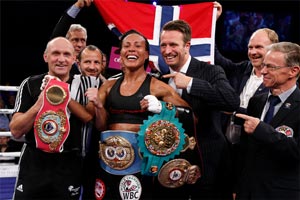 Undisputed champion Braekhus: I’ve been dreaming of this moment for a long time Boxing history was made in Copenhagen, Denmark Saturday night. Norwegian star Cecilia Brækhus (26-0, 7 KOs) became the first female boxer to unify a division by holding all four major titles simultaneously. The WBC, WBA & WBO Champion scored a unanimous decision victory over IBF Champion Ivana Habazin (13-2, 5 KOs) to become the undisputed welterweight queen. Cheered on by her loyal army of travelling Norwegian fans, Brækhus once again proved why she is the pound-for-pound female number one with a classy performance against the tenacious Habazin. All three judges scored the fight 100-90 in favour of ‘The First Lady.’

“I’ve been dreaming of this moment for a long time,” said Braekhus. “To become the first female boxer to unify a division is a huge achievement and something that I am extremely proud of. I would like to thank all the fans that travelled to Copenhagen to support me and Ivana for the part she played in this historic fight.”

Promoter Nisse Sauerland added “Cecilia is a phenomenal athlete. Not only will she go down in history as the first female unified champion but it is our belief that she will be remembered as the greatest female boxer of all time.”