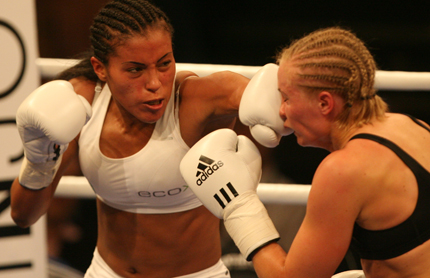 WBO, WBC & WBA Female Welterweight Champion Cecilia Braekhus (18-0, 4 KOs) will take on Hawaiian Kuulei Kupihea (7-1, 2 KOs) at Helsinki´s renowned Hartwall Areena on December 3. The fight was originally scheduled to take place on Team Sauerland´s big show in Copenhagen´s PARKEN Stadium on November 5, but the event was postponed after Danish national hero Mikkel Kessler suffered a hand injury in practice. “Unfortunately, injuries and postponements are part of the game,” Braekhus said. “As a professional, you just have to deal with it. I adjusted my training, took a few days off and then got straight back to the gym. I will be ready for Kupihea on December 3.”

Ulli Wegner, eight-time German coach of the year, is pleased with the First Lady´s progress. “She is the best female boxer in the world,” he stated. “She is intelligent, good-looking and extremely talented. My other boxers can learn a lot from her, especially when it comes down to determination in practice. I am sure she will make another great fight in Helsinki.”

It will be Braekhus´ second fight in the Finnish capital. In May 2009, she defeated Amy Yuratovic on points. Said promoter Kalle Sauerland: “It is no secret that Team Sauerland is focusing heavily on the Scandinavian market and a big show in Helsinki is further proof.”