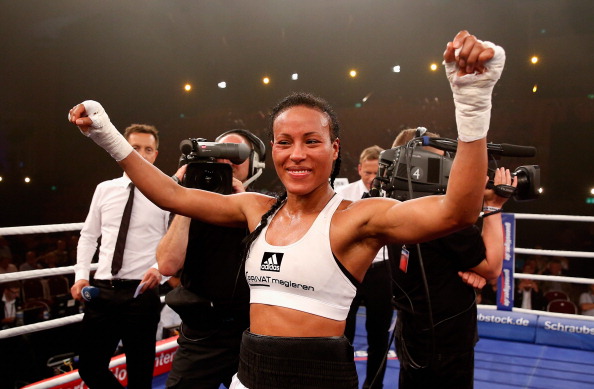 Cecilia Braekhus, 31-0, retained her five – WBA, WBC, WBO, IBF and IBO – female titles tonight in Bergen, Norway, on a rainy (nothing unexpected as it almost always rains in Bergen) outdoor show with an unanimous decision over Argentinean challenger Erica Farias (24-2, 10 KOs), who is the WBC champ at 140.

The judges had it 98-92 twice and 99-9 after ten two minute rounds of boxing in a no knockdown affair.

A native of Bergen from childhood, Braekhus is universally recognized as the #1 women’s Pound-for-Pound fighter in the world.

Following the lifting of the decades long ban in Norway of professional boxing which Braekhus was instrumental in removing, she has defended her titles twice in her homeland.

On October 1, 2016, Braekhus knocked out Anne Sophie Mathis in the second round in front of a sold out crowd at The Spectrum in Oslo, Norway. Most recently she won a 10-round unanimous decision over Klara Svensson at the same venue on February 24, 2017.

“This training camp has been terrific with Johnathon (Banks), this is our fourth fight together and I’m continuing to learn a great deal from him. In my last three fights I’ve become much more of an aggressive fighter and he’s truly brought that out in me, more of an American and Detroit style of fighting. This is my true homecoming as I’ve lived in Bergen since the age of two,” Braekhus said.