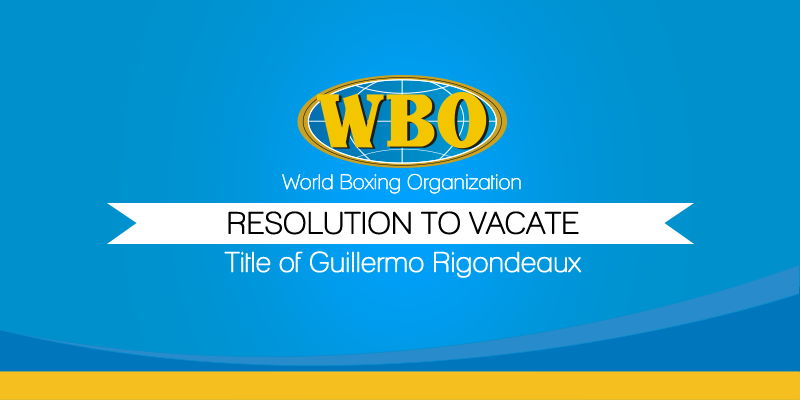 WHEREAS, on April 13, 2013 Guillermo Rigondeaux became the WBO Junior Featherweight Champion of the World by earning a unanimous decision victory over Nonito Donaire in New York’s Radio City Music Hall; and,

WHEREAS, Mr. Rigondeaux’s first defense of the title took place nearly eight months after he first obtained it, in a wide unanimous decision victory against Joseph Agbeko on December 7, 2013 at the Boardwalk Hall in Atlantic City, New Jersey; and,

WHEREAS, on July 19, 2014 Rigondeaux defeated Sod Kokietgym via KO in the first round of a fight held at the Cotai Arena, in Macao, China and finally earned another victory against Hisashi Amagasa on December 31, 2014 at the Bodymaker Colosseum in Osaka, Japan; and,

WHEREAS, in summation, since becoming the WBO Junior Featherweight Champion of the World nearly thirty-one (31) months ago, Guillermo Rigondeaux has defended his title only three times, the last one almost ten months ago; and,

WHEREAS, on October 7, 2015 this WBO World Championship Committee sent a letter to Mr. Rigondeaux and his promoter, Boris Arencibia of Caribe Promotions, ordering them to show cause as to why Rigondeaux has not defended his WBO Junior Featherweight Title under the terms of the WBO Regulations of World Championship Contests, and in spite of our particular leniency in allowing him the opportunity to face any of the top 15 classified contenders in the division; and,

WHEREAS, on October 16, 2015 we received written communication from Jared Lopez on behalf of Mr. Rigondeaux and his promoter, Caribe Promotions, in response to the show cause order issued by this Committee; and,

WHEREAS, Rigondeaux’s show cause response raises two main arguments: 1) That “Mr. Rigondeaux should be granted an exception under sections 1 (b) (20) and (5) (a) of the WBO Rules, as he has sought to remain active in compliance with WBO Rules but there is a lack of appropriate opponents available and willing to fight” and 2) that “it would be an abuse of discretion to vacate because Mr. Rigondeaux has never failed to defend against the mandatory challenger;” and,

WHEREAS, in support of these arguments, the letter adds that “the WBC and IBF Champions [have been] unavailable” and that “Mr. Rigondeaux previously requested the WBA order [a] mandatory defense with Scott Quigg to no avail;” and,

WHEREAS, this WBO World Championship Committee has thoroughly considered the written representation made during the show cause period on behalf of WBO Junior Featherweight Champion Guillermo Rigondeaux, and we are not moved to consider the reasons contained therein to constitute “cause” for Mr. Rigondeaux’s failure to comply with our Regulations of World Championship Contests; and,

WHEREAS, Section 1 (b) 21 provides that a championship title may be vacated regardless of cause or fault if the Champion has not defended within a nine (9) month period (Emphasis added); and,

WHEREAS, Section 20 outlines the procedure when a title is declared vacant, stating that “[a] World Championship may be lost for breach of contract, for disability to fight or make required weight, inactivity, or for any other reason established in the regulations that govern World Championships (Emphasis added);” and,

WHEREAS, in making determinations of this sort, the WBO World Championship Committee is guided by the principles set forth in the preamble to our Rules, namely, that:

The World Championship has been established for generations as the highest objective in professional boxing. A World Championship is not the property of any boxer. The Championship is a trust, subject to the conditions defined herein, for the use and benefit of all boxers and boxing fans, who through their contribution of time, effort, risks and resources sustain the existence of the profession.

WHEREAS, this Committee shares Team Rigondeaux’s opinion that he is a fighter of utmost skill and pedigree, a gifted athlete that is not only perhaps the greatest amateur boxer ever, but also one of the top pound-for-pound professionals in the world; and,

WHEREAS, we also recognize that Mr. Rigondeaux’s talent, record of accomplishment and complicated style, invariably pose difficulties securing premium fights on the top-tier stage, but that it is the boxing promoter’s paramount responsibility— not ours or that of any sanctioning organization for that matter— to secure, organize, and produce such fights; and,

WHEREAS, “[seeking] to remain active in compliance with WBO Rules,” a mere desire and willingness to fight, is not sufficient cause, for Mr. Rigondeaux and his promoter cannot shield themselves from their responsibility to remain active, particularly not by invoking this Committee’s power to order a Mandatory Defense, a rule itself designed as discretionary; and,

WHEREAS, it is hardly an “abuse of discretion” for this Committee to take into account all of Mr. Rigondeaux promotional complications and in his best interest and that of all of the WBO Junior Featherweight Division, choose not to exercise the discretion to order a Mandatory Defense and instead afford him great latitude and the opportunity to face any of the top 15 classified contenders; and,

WHEREAS, we can sympathize with Mr. Rigondeaux aspiration “to face only the very top competition in the 122lbs division,” his show cause response to this Committee misconstrues Section 14(a) of the WBO Regulations of World Championship Contest; and,

WHEREAS, Rule 14(a) states that, “it is the policy of the WBO to encourage its Champions to pursue recognized status as undisputed World Champions and to unify the Championships of the four major world sanctioning organizations (the WBO, WBA, WBC and IBF),” it speaks to cases in which a Mandatory Defense is due but an opportunity to unify championships is also present; and,

WHEREAS, in this context, Rule 14(a) cannot be construed as unhindered license for a fighter to exclusively purse unification contests, as such, we are not at all persuaded by the argument that, “WBC Champion Leo Santa Cruz and IBF Champion Carl Frampton, are not available or willing to fight Mr. Rigondeaux […] because Messrs. Santa Cruz and Frampton are fighters under the direction of boxing advisor Al Haymon and as such they have refused to negotiate unification bouts with Mr. Rigondeaux;” and,

WHEREAS, Mr. Rigondeaux’s letter also asserts that he unsuccessfully petitioned the WBA to order a mandatory defense against Scott Quigg, although this Committee understands that under WBA Rule 18 the president and committee of that organization may have forced that match with the so-called “regular” champion, that they didn’t, has no bearing on our decision; and,

WHEREAS, the WBO again acknowledges Mr. Rigondeaux’s qualities as a fighter, his outstanding amateur background as a two-time Olympic Gold Medalist; and,

WHEREAS, the WBO further recognizes Mr. Rigondeaux standing as a top pound-for-pound fighter, his ability to be a champion for a long time, we are invariably bound by and must enforce our Rules and Regulations.

NOW, THEREFORE, BE IT RESOLVED by the WBO World Championship Committee according to our Regulations that:

This is a final decision of the WBO World Championship Committee. The affected WBO Participant may appeal to the Complaint and Grievance Committee, pursuant to WBO World Championship Section 34, which as per Rule 3(e) of the WBO Appeals Regulation, must be submitted in writing to the WBO President within fourteen (14) days of the date of this decision as its sole and exclusive remedy:

Any WBO Participant, including, but not limited to a Boxer, Manager, or Promoter who is or could be affected by a determination of the World Championship Committee who wishes to contest such a determination must, as his or her sole and exclusive remedy, file a Complaint pursuant to the WBO Appeal Regulations. In all cases the complaint shall be referred to the WBO President, who may attempt for a reasonable period to resolve the complaint amicably. The WBO President may reject a complaint or he may refer it to the Complaints and Grievance Committee which shall determine the complaint or grievance in accordance with the WBO Appeals Regulations.

Any Appeal, Complaint, or Grievance (hereinafter referred to as a “Complaint”) shall be submitted in writing to the President. Any WBO participant may submit a Complaint. The President is authorized to attempt to resolve any such Complaint by alternative dispute resolutions such as negotiation or mediation. If, after ten (10) days of attempting methods of alternative resolution, the President determines such methods of alternative dispute resolution will not fully and finally resolve the Complaint, he shall submit such Complaint for determination to the Complaints and Grievance Committee.