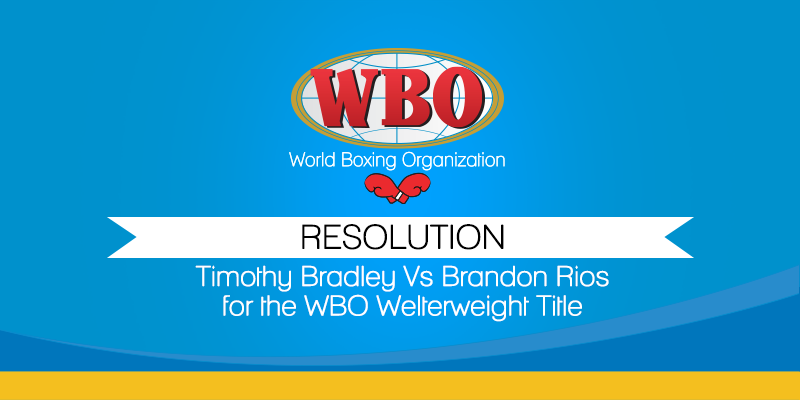 WHEREAS, the sanctioning of a WBO Interim Championship Contest entailed that, should Mr. Floyd Mayweather Jr., former WBO Welterweight Champion of the World, not comply with the terms and conditions set forth in the WBO Regulations of World Championship Contests, the winner of the June 27, 2105 Bradley-Vargas WBO Interim Welterweight Bout would be considered the full holder of the WBO Title; and,

WHEREAS, Timothy Bradley, Jr. was declared winner over Jessie Vargas via 12-round unanimous decision, thus becoming later on the WBO Welterweight Champion of the World; and,

WHEREAS, on August 7, 2015, WBO President Francisco Valcarcel ordered a thirty (30) day negotiation period for the WBO Welterweight Championship between Bradley and WBO Mandatory Challenger Sadam Ali, further advising the parties that they could request a Purse Bid or ask for additional time to negotiate; and,

WHEREAS, on September 18, 2015 Top Rank, on behalf of itself and Champion Bradley, wrote to request that the WBO sanction his upcoming November 7, 2015 bout against WBO #3 Classified Contender Brandon Rios as a defense of his WBO Welterweight Championship of the World, pursuant to Section 5 of the WBO Regulations of World Championship Contests; and,

WHEREAS, in support of their sanctioning request, Top Rank argued that in accordance to Section 5, Mr. Bradley was permitted to take an “interim, sanctioned defense of his title against a fighter ranked within the top fifteen” and that “Mr. Rios is currently ranked number 3;” and,

WHEREAS, this Committee likewise has discretion under its rules to “determine if there is good cause to extend the time during which a Champion must make a Mandatory Challenge” and in conformity with Section 1 (b) (4) (20) to additionally “recommend exceptions or variations from the Rules” as we determine necessary; and,

WHEREAS, there is no disputing that Sadam Ali is the WBO Mandatory Challenger— and is as such entitled to contest the WBO Welterweight Championship of the World— but in the opinion of this Committee also has the skill, pedigree, and ring accomplishment, that have made him utterly deserving of his designation; and,

WHEREAS, the WBO World Championship Committee has waited until this time to express itself and reach a determination on the sanctioning of the Timothy Bradley, Jr. vs. Brandon Rios Welterweight Contest, to allow negotiations pertaining to Mr. Ali to run its due course; and,

WHEREAS, the WBO, and this Committee specifically, has always made it abundantly clear that it reserves the right to protect its Welterweight— and all divisions— from stagnation, requiring that all WBO Participants comply with our Rules and Regulation; and,

WHEREAS, the WBO World Championship Committee— in consideration of Mr. Sadam Ali’s status as the designated Mandatory Challenger— has all along been inclined to grant Mr. Bradley authorization pursuant to Section 15 (a) of the WBO Regulations of World Championship Contests to participate in a non-championship, 12 round fight, against Mr. Brandon Rios; and,

WHEREAS, following the above referenced August 7, 2015 WBO Order to Negotiate, it is well-known to all in boxing that several scenarios have surfaced— including but not limited to having the winner of the Bradley-Rios bout move up to the Jr. Middleweight division, having Sadam Ali take an interim bout before challenging for the World Title, etc.; and,

WHEREAS, this WBO World Championship Committee is knowledgeable of the negotiations that to this date have taken place between Top Rank, Golden Boy Promotions and all sides involved, particularly of the “step aside” offer made to Mr. Ali—one that he initially refused and later accepted (but was finally withdrawn by the promoter); and,

WHEREAS, the WBO World Championship Committee is further aware of discussions between Golden Boy and Top Rank for a fight between Sadam Ali and Jessie Vargas; and,

WHEREAS, given the particular circumstances— outside the scope of this discussion— but that generally speaking pointed to the possibility that the winner of Bradley-Rios move up in weight and compete in the Jr. Middleweight Division, said fight between Ali and Vargas would have been, by way of exception, for WBO Interim Welterweight Title;

WHEREAS, according to reports, after a date and venue was originally secured for an Ali-Vargas WBO Interim Bout, Ali withdrew because he did not want to fight in the West Coast, and later, after the Vargas side agreed to take a fight with Ali scheduled for the month of December, Vargas pulled out because he was equally uninterested in fighting in the East Coast of the United States; and,

WHEREAS, due to the undeniably particular circumstances described above and the best interests of the WBO Welterweight division and all of its participants,

NOW, THEREFORE, BE IT RESOLVED by the WBO World Championship Committee according to our Regulations that:

Dated in San Juan, Puerto Rico on this 6th day of November, 2015