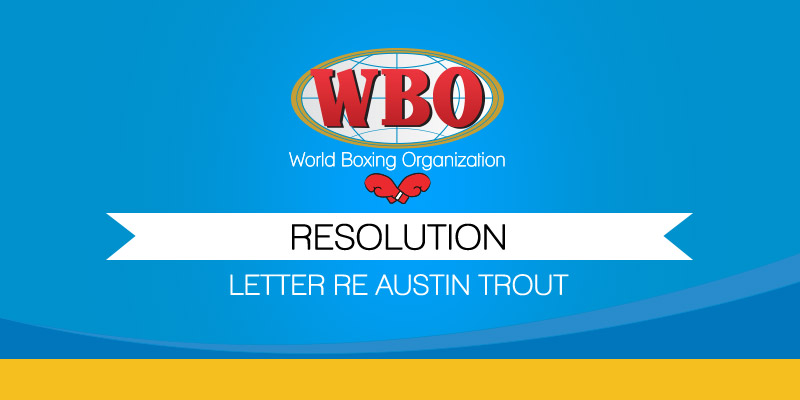 Dear Bob: On February 29th 2016, WBO’s Legal Counsel, Andrew W. Horn, forwarded a letter from Austin Trout’s Legal Counsel, David Lutz complaining that, “Indeed, Mr. Trout defeated the current no. 1 contender, Miguel Cotto, by a wide margin. The current no. 2 contender, Michel Soro, is basically a complete unknown whose only victory of which I believe anyone is aware is over Glenn Tapia, who is only known as the individual who was beaten to a pulp by James Kirkland.”

Pursuant to this, the Ratings Committee granted Austin Trout’s Legal Counsel’s request by classifying Mr. Trout as #1 contender on the WBO March Ratings that were sent to the Association of Boxing Commissions and posted on our website at www.wboxing.com. The Explanations read as follows: “Austin Trout (30-2) – USA – Moved to number one position as per Mr. Trout’s legal representative, David Lutz, Esq., request on letter dated February 29, 2016 and, winning over Miguel Cotto on Dec. 1, 2012 and Michel Soro’s been inactive since June 20, 2015. The Ratings Committee granted his lawyer’s request to move Mr. Trout as a number one in the ratings. KO’ed Joey Hernandez (24-3-1) in the sixth round on Sep. 8, 2016.”

On March 21st 2016, a negotiation letter was sent from the WBO Championship Committee to Austin Trout’s representatives stating that, “the parties have 30 days to negotiate an agreement for the WBO Jr. Middleweight Championship bout between Liam Smith and Austin Trout.”

By April 5th 2016, we began receiving letters advising us that the parties were not reaching any agreement and by April 11th, Liam Smith’s representatives stated that, “It is clear from the dialogue that Austin Trout has no real interest in making this fight.” Finally, through an article dated April 13th on PremierBoxing.com we found out that Mr. Trout was fighting against Jermall Charlo on May 21st . On April 25th, another article on BoxingScene.com with the title ‘Photos: Austin Trout Grinds Hard For Jermall Charlo Title Shot’ appeared. Unbeknownst to us, Mr. Trout had already negotiated this bout while his party pretended to negotiate for the Liam Smith bout on June 4th in the UK.

Due to this, on April 22, 2016, a letter was sent to Austin Trout’s representatives giving them forty-eight (48) hours to inform the WBO of the veracity of the articles. Furthermore, it said that if in the stipulated time frame an answer is not received, the WBO would assume that Mr. Trout is not interested in fighting for the WBO title and that he was in fact fighting Jermall Charlo on the 21st of May.