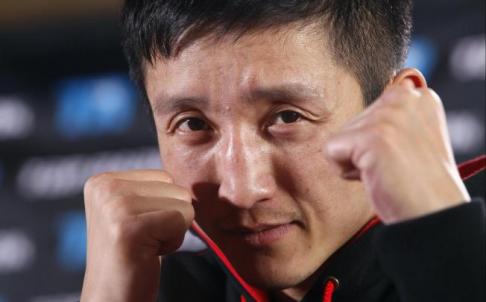 China Olympic medallist is certain he can make the switch from amateur to pro with trainer Freddie Roach at nine-bout Macau event next month.

I can manage the transition

by making myself stronger through training

and leveraging my speed in the ring

China’s most celebrated boxer, Zou Shiming, is confident of making the transition from two-time Olympic gold medallist to future professional champion when he steps into the ring on a new journey in Macau next month.

Zou, who is training with Hall of Famer Freddie Roach in California, will make his pro debut against Mexican Eleazar Valenzuela (2-1-2, 1 KO), in a four-round flyweight bout at the Venetian’s Cotai Arena on April 6.

And 31-year-old Zou said he would not let anyone down, saying his new training regimen would take him further as a fighter than ever before.

“Boxing is a sport for the brave. The rules of professional boxing, the ability to throw a powerful punch as well as taking one are all new challenges to me. But I am confident I can manage the transition by making myself stronger through training and leveraging my speed in the ring,” Zou said from Los Angeles, where he is training at the Wild Card gym.

“The adaptation to the rules, physical fitness and strength are all my current focus. There are huge differences in amateur boxing and professional boxing, especially the pace of the match and the number of rounds.

“I am really fortunate to be trained by legendary coach Freddie Roach [Manny Pacquiao’s trainer] at his gym. I have learned a lot from his effective training methods.

“With Freddie and his team’s help, I am adapting to the professional boxing atmosphere very quickly.”

Zou has been in the US for the past month since signing a deal with well-known promoter Bob Arum to join his Top Rank stable.

The Guizhou native said it was a dream to turn professional, something he wanted to do at the end of the Beijing Olympics, but was not able to do so.

“I needed to train and prepare for the London Games and it just didn’t happen sooner [turning pro]. After winning gold again in London, I finally realised my dream of turning pro. Professional boxing is a dream journey for me. I will strive to make all my dreams come true,” said Zou, who was also a bronze medallist at the Athens Games in 2004.

“Fists of Gold” will also be attended by legendary two-time world heavyweight champion George Foreman who will be at ringside at the event, providing blow-by-blow commentary for US audiences.