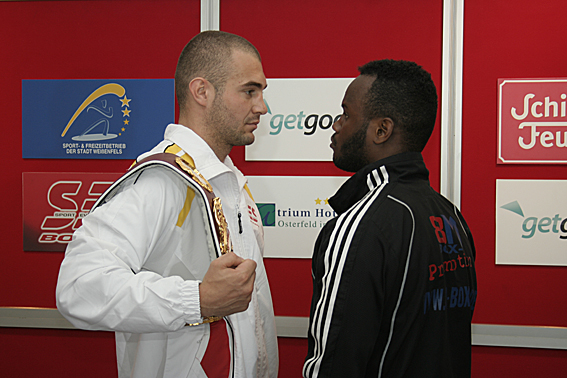 The SES boxing gala on 14 June will be devoted to the “Team Germany”, the SES young hopefuls for the German boxing. Young, fresh dynamic – it must be boxing. In addition to the “Team Germany” Captain Dominic Boesel be in Weissenfels more young German talent “Team Germany”, the German cruiserweight champion Dennis Ronert that young knockout talent at super middleweight Moritz steel, Halbweltergewichtler Felix lamb and the two professional debutants , the Crusiergewichtler Pahlmann and heavyweight Tom Tom Black of Boxgala presented.

Ulf Steinforth:
“We want Team Germany ‘with the show, that there are enough young talent for boxing in the country. These are fresh faces and a new form in professional boxing. The team consists of young athletes, we provide the foundation to be successful in sports can. ”

Dominic Boesel:
“It’s a huge thing to be able to box in the region. The atmosphere will be crazy. I am very proud of my title and I will not give it away. I respect my opponent Chris as a good boxer, but I also I need not much to talk about. I feel very safe. ”

Dirk Dzemski:
“I’m very proud of Dominic. He got off to a good development. He is diligent in training and therefore legal team captain. It is an example for the other. Chris is always ready for a good fight. I think Dominic is the better one. ”

Chris Mafuta:
“I’ll take the fight very seriously. Dominic will be surprised how fit I will be. ”

Frank Marchl:
“It is important that the title remain in Germany and Saxony-Anhalt. It is not some happy, but the belt will go to Halle. Chris is in the form of his life. The fight will not go the rounds. ”

Dennis Ronert:
“I train very hard. It’s not easy to spend eight hours on the construction site, and then to train for three hours. But I want to win the fight. ”

Moritz Steel:
“It was an honor to be able to boxing in the last fight under the Klitschkos. As I went through 6 rounds. On my next fight in Weissenfels, I will try again to win early. ”

Felix Lamb:
“My weight is not so much the focus of attention. In, Team Germany ‘can I present myself well. So we are on a good path. ”

Tom Black:
“I look forward to the first use and train for some time for it. I want to win my debut prematurely. ”

“Team Germany” is the latest project of the SES Boxteams, which will have for the first time in White Rock Ring Premiere.

The fight night from the city hall in Weissenfels Hall will be broadcast on 14 June 2013 live by SPORT1.

Tickets for the event are available at all the usual outlets, at www.eventim.de and under the SES Ticket Hotline +49 391 7346430.