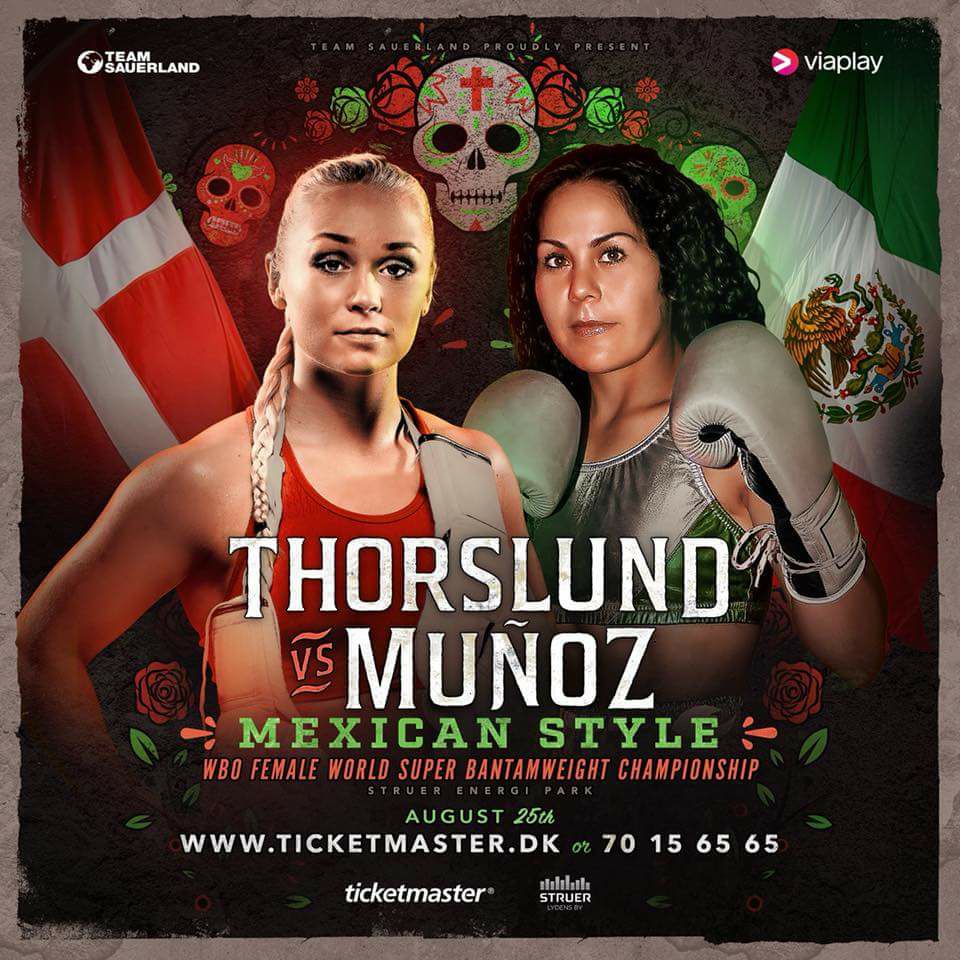 The undefeated 24 year-old now has the opportunity to add another title to her collection as she meets Munoz for the WBO super bantamweight crown.

“It’s great to have another World title fight with one of the big federations,” said Thorslund. “It is very important to me that my career continues on an upward curve. I only want to face the best to prove I am the best in the world.”

Following two sell-out shows at the Struer Energi Park, Thorslund will once again be counting on home support to overcome her Mexican opponent.

“It’s amazing the fight will take place in my hometown Struer,” she says. “This will be the third time I get to fight in Struer and it’s getting wilder and wilder every time, and my feeling tells me this event will be the wildest one yet.

“My diet and weight is already under control. My shape is really good and I feel I’m at the best starting point ever before a fight.

“It’s amazing the fight will take place in my hometown Struer. It’s like it’s getting wilder and wilder for every time. It’s the third time now I’m going to fight in Struer, and my feeling tells me this event will be the wildest one.

“I haven’t had the chance to study my opponent too much yet, but I’ve heard that she’s a very busy fighter, so there will be more pressure and more physicality in this fight compared to my last.

“Mexican boxers have the reputation of being really, really strong. They come at you like a freight train. So I have to prepare for that. I will have to keep the pace down a bit, because I want to be the one who dictates the pace. I am confident that my will and strength will make me victorious.”

Thorslund’s can expect a tough test from Munoz, who inspired by fellow female fighters Jackie Nava and Ana Maria Torres, subscribes to the all-action ‘Mexican style’, which she has combined with speed and grace to earn the nickname ‘La Gacela’ (The Gazelle).

“Winning a World title is a great motivation for me,” said the 27 year-old. “Dina is a strong rival who likes to fight on the front foot but with my technique and speed I will defeat her.

“I am giving 100% in every training session and I will be prepared for whatever she has to offer. Fighting in her hometown motivates me to be even stronger. I am ready for a great challenge, and like all Mexican fighters I will leave everything in the ring!”

Said promoter Nisse Sauerland: “This is a great opportunity for Dina to establish herself on the World scene. Winning the WBO World title can make her a global star and open the doors to high-profile unification fights in one of female boxing’s strongest divisions.

“She faces a dangerous opponent in Munoz. Mexican fighters are known for the heart and aggression. Two attributes Dina has also shown throughout her career. Like GGG, Dina fights with the Mexican style. Reminiscent of great fighters like Chavez or Barrera.

“She comes forward, she doesn’t back down and she wants to take her opponents out early. That’s what makes her so entertaining to watch and exciting to promote. On August 25, fans can expect an all-action Mexican style showdown in Struer!”

Tickets for the WBO World Super Bantamweight Championship contest between Dina Thorslund and Yessica Munoz on August 25 at the Sruer Energi Park are on sale now and available via www.ticketmaster.dk or by calling (+45) 70 15 65 65.