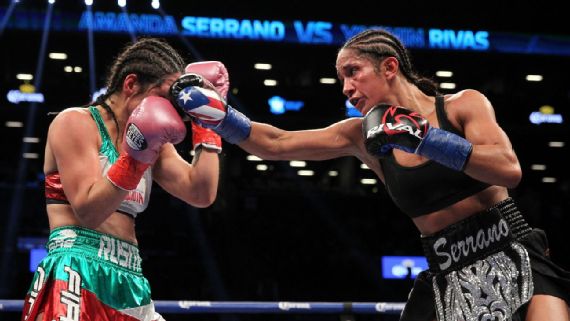 Amanda Serrano, right, won on all cards to retain the WBO junior featherweight title in front of her hometown crowd in Brooklyn, N.Y. Ed Diller/DiBella Entertainment

“We wanted the knockout, but I was ready for 10 rounds,” Serrano said. “People who think I’m just a brawler saw that I’m a great boxer today.”

Rivas, who took home $15,000 for the fight, still has yet to be knocked out in her professional career, while Serrano, who took home $17,500, carried a knockout percentage of 72 heading into the matchup — a rate unrivaled among the top women fighting in the junior featherweight division.

Still, Serrano went after Rivas aggressively throughout the fight, throwing 431 power punches and landing 177 (44 percent), while Rivas threw nearly 100 fewer and landed only 29 percent (97 of 332).

“She hit hard, but I hit her harder,” Serrano said. “I could hear her breathing in between rounds and I knew I had her.

“It was a great night for women’s boxing, and I hope it keeps getting bigger and bigger.”

The three judges scored all 10 rounds within a one-point margin, with their scorecards reflecting Serrano’s dominance in the middle rounds and strong performance in the final round to close it out.

“It was an excellent fight,” Rivas said. “I knew everything was against me and to win I had to knock her out. Unfortunately, it didn’t happen today.”

Serrano’s victory aired on Showtime Extreme, a subnetwork of Showtime, on the undercard of the network’s doubleheader headlined by the Badou Jack-James DeGale super middleweight world title unification bout.

The last women’s world title fight on English-language television in the U.S. was Mary Jo Sanders’ defeat of Valerie Mahfood by unanimous decision to retain her International Boxing Association female middleweight title on March 30, 2007, on ESPN2.

Serrano-Rivas also was the first women’s fight on a Showtime network (non-pay-per-view) since 2000.