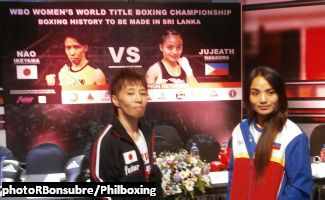 The continued success of the WBO in moving into previously uncharted territory was again put on display this weekend as WBO female atomweight champion Nao Ikeyama defended her title against Filipina challenger Jujeath Nagaowa (13-16-1, 8 KOs) in Colombo, Sri Lanka Saturday night. Ikeyama (17-3-1, 4 KOs), who is currently the oldest world champion in boxing at 46 years of age, looked sharp against her 28-year-old opponent. Winning a comfortable decision (by scores of 98-92, 96-94, and 97-93), Ikeyama returns to Japan in possession of the WBO title she won back in May of 2014.

But the event proved to be a huge success not only for Ikeyama and the WBO, but also for the sport of boxing. With the first ever professional card in Sri Lanka, a country that until 2009 suffered from a devastating civil war, it was clear from the near capacity crowd and the warm reception for both fighters that Sri Lanka will remain a hotbed of boxing in the years to come. The event brought out dignitaries from all over the nation including the Minister of Sports. The event was promoted by Yasushi Hirayama of Futur Promotions Japan and Capital Maharaja Sports of Sri Lanka.

Also on the two fight card, female super flyweight contender Tamao Ozawa of Japan scored a third round TKO over Thailand’s Kledpetch KKP. With the win Ozawa improves to 10-2 while KKP drops to 6-5, 1 KO.