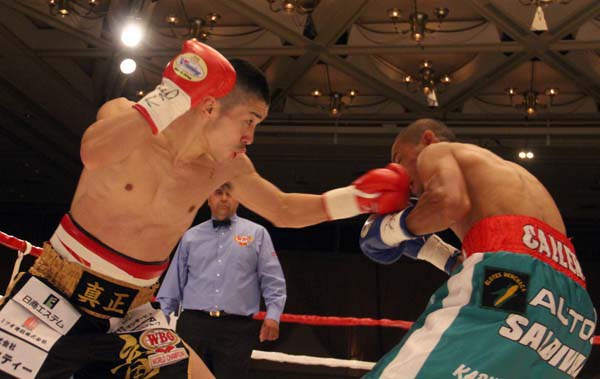 WBO 105-pound champ Ryuya Yamanaka (16-2, 5 KOs), 105, impressively kept his belt in his initial defense as he was awarded a TKO victory after the eighth round when Mexican Moises Calleros (28-8-1, 16 KOs), 105, quit on the stool because of his absorption of punishment in the eighth on Sunday in Kobe, Japan.

Yamanaka utilized his faster left hand to be leading on points: Gerard White (US), Jose Roberto Torres (Puerto Rico) both 80-72, and Salven Lagumbay (Philippines) 78-74, all for Yamanaka. The ref was Jose H. Rivera (Puerto Rico). Calleros showed his retaliation with body shots to the fleet-footed champ in the third and fourth, but Yamanaka took the pace and accelerated his furious attack to hurt the game Mexican with a flurry of punches in the fatal session.

Before this reporter writes a detailed fight report, I wish to describe Ryuya Yamanaka’s heart-warming life story to support his family. His mother Rie, 46, divorced with six children including the oldest son Ryuya when he was only thirteen. She devoted all herself to having them grow up within a very limited economy. Since she had to take care of small sons and daughters in the daytime, Rie worked at night–serving as a dishwasher, taxi car washer, night sweeper, etc.

Ryuya gave up going to high school and began to work at the age of sixteen to support his mother and family. The shaven skulled Ryuya happened to watch his future idol and club senior, then WBC bantamweight champ Hazumi Hasegawa successfully defend his belt by a spectacular knockout, and made up his mind to enter the same boxing club, Shinsei Gym. His younger brother Daiki, 19, also followed a same footstep and became a professional boxer in the minimum division, scoring a 5-2 ledger.

For what does he fight? Ryuya says, “I strongly wish to build a house and gift it to my mother and family.” They lived in a small apartment together since his childhood, and it is Ryuya’s strong motivation to keep defending his world belt to realize his dream to have his family live in a new house with his ring earnings.

Japan, generally speaking, has become rich and a great majority of the younger generation seldom know poverty and hunger. But Ryuya Yamanaka had a real hunger for fame and fortune for the sake of his family to have them enjoy a wealthy life. Let’s go back to review the title bout where Yamanaka displayed a remarkable improvement and unexpectedly halted the highly regarded Mexican hombre.

Ryuya Yamanaka, unlike great WBC 118-pound champ Shinsuke Yamanaka, hadn’t been highly evaluated by our fight scribes because of (1) a low KO ratio (15-2, only 4 KOs), (2) a previous first-round knockout loss by Kenta Shimizu in his fifth bout of the national four-round tourney and (3) his outboxing style (people here love aggressive punchers). He lost a split verdict to free-swinging Filipino Roque Lauro in 2014, which was his last setback with eight consecutive victories since. Ryuya displayed very sharp outboxing in acquiring the vacant OPBF 105-pound belt by outspeeding and outpunching top ranked OPBF contender Merlito Sabillo en route to a lopsided decision (119-110, 118-110, 117-111) in Kobe in November 2016.

Having moved up to be the WBO top challenger, Yamanaka went to the champion’s home turf—Ashikita gun (ward) in Kumamoto Prefecture—to have a mandatory shot against compatriot Tatsuya Fukuhara last August. An obvious underdog Ryuya amazingly caused an upset and wrested the WBO minimumweight belt by a unanimous decision (116-112, 115-113 twice) over twelve hard-fought rounds. Yamanaka outlegged the game southpaw infighter Fukuhara to win the belt.

Mexican Moises Calleros was the hombre that Fukuhara struggled to beat on a split decision (116-112 twice, 113-115) in the WBO title bout for the vacant championship in February 2017. Ryuya’s manager/promoter Masato Yamashita, in this voluntary defense, selected the tough and dangerous Calleros in his first defense.

From the outset, Ryuya displayed good jabs and fast footwork to take the initiative. Faster on hand and foot, Yamanaka was in command in the first two sessions. But Calleros positively attempted to mix it up in the middle or close range in the third and fourth sessions. Ryuya, however, regained his rhythm and footwork from the fifth onward, and worked the body with solid shots that apparently weakened the game Mexican. Jabbing with precision, Ryuya completely dominated the pace and hurt the onrushing Mexican with solid and accurate uppercuts to the face.

The fatal eighth witnessed Ryuya positively turn loose with sharp left-right combos and pin him to the ropes with a flurry of punches, and Calleros barely weathered the storm of Ryuya’s aggression. But it was surprising that Calleros quit going on after the eighth, which might show his damage caused by Yamanaka’s determined onslaught.

The victor jubilantly said in the ring, “I’m happy to win and defend my belt. Mother, I always thank for your support!” The crestfallen loser with a swollen face said, “Yamanaka was fast and skillful. His uppercut really hurt me.”

His manager Yamashita smilingly said, “I trained his left hand exclusively, and he improved his power of the left hand in jabbing and left-hooking. He is still twenty-two, and will become stronger with his discipline.”

The champ will enjoy a vacation to accompany his family to Nagashima Spa Land, a family resort place. The still-improving Ryuya may become an excellent champion with good footwork and sharp jabbing.