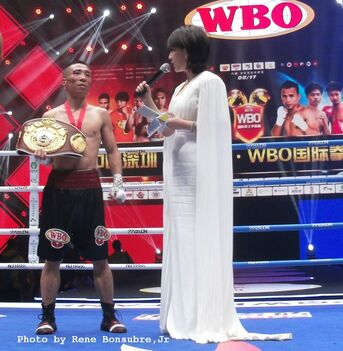 SHENZHEN, CHINA- Jing Xiang exploited his size advantage over Jomar Caindog and came up on top in their battle for the vacant WBO International Mini-Flyweight title.

Xiang, from China, built his lead using his jab and quick combos in a fast paced contest. Caindog, from the Philippines, tried to close the gap and was still in the fight due to his aggression. But Xiang knew he could take Caindog’s punches and showboated as the rounds progressed. In the eighth round, an accidental clash of heads inflicted a long deep gash below the right eyebrow of Xiang which lead to the fight being halted. It went to the scorecards for a technical decision.

The judges scores – Mark Leong (Macao) and Edward Ligas (Philippines) had it 77-75 while Surat Soikrachang (Thailand) scored 79-73, all for Xiang.

Xiang successfully went down in weight after having previously campaigned at 112 and 108 lbs. He had previously beaten two former world champions back to back – Thailand’s Suriyan Satorn and Filipino Merlito Sabillo.

An accidental clash of heads in the 8th in Shenzhen, China puts the bout for the WBO International minimumweight title prematurely to the scorecards. China's Jing Xiang (17-4-2, 3 KO's) wins a technical decision over Filipino Jomar Caindog (10-2-1) #boxing pic.twitter.com/e3KP8kMZQh

Xiao Tao Su of China stunned Shota Yukawa of Japan and stopped him in round one for the vacant WBO Oriental junior lightweight title. Su staggered Yukawa with a hard combo and the Japanese would have been knocked down early if it wasn’t for the ring ropes. He continued to bring the fight to Su but a well-timed hard right sent Yukawa crashing to the canvas. Referee Sawaeng Thaweekoon of Thailand signaled the end at the 2:30 mark.

Xiang Li got two belts in one bout when he beat South Korean Do Jin Lee by TKO in round seven. The fight was rather uneventful until the seventh when Li exploded and dropped with a flurry of punches. Lee seemed to lose his equilibrium when he tried to get up and Referee Surat Soikrachang stopped it at 2:57.