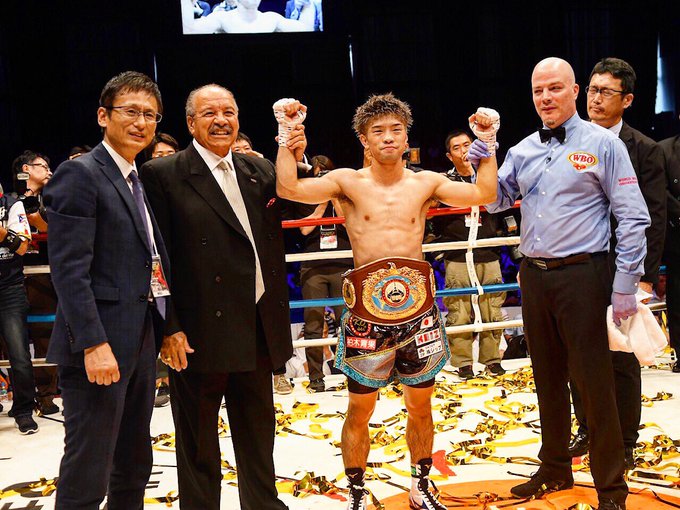 Earlier today WBO Flyweight champion Kosei Tanaka (14-0, 8) [田中恒成] held a special press conference to announce that he would fight again this year, making another defense of his WBO world title in December.

The talented and well regarded youngster, who has already beaten Ryoichi Taguchi and Jonathan Gonzalez in 2019, announced that he would be up against in form Chinese fighter Wulan Tuolehazi (13-3-1, 6) [乌兰] on New Year’s Eve at the Ota City Gymnasium. And would be sharing a card with Kazuto Ioka (24-2, 14) [井岡一翔], who defends the WBO Super Flyweight against mandatory challenger Jeyvier Cintron (10-1-0-1, 5) on the same show.

The talented Japanese youngster, who is already a 3 weight world champion, stated that he wanted to win by KO, though it was clear his team were wary about Tuolehazi, who has been a thorn in the side of Japanese boxers recently.

The Chinese challenger has been on a tear since a 2-3 start to his professional career and is 3-0-1 (2) against Japanese fighters, with wins against Takeshi Kaneko, Ryota Yamauchi and Satoshi Tanaka. He’s not the most skilled of fighters out there, but he’s awkward, strong and tough, and also holds a notable win over Jayr Raquinel.

Whilst Tuolehazi has been on a roll this is will be only his second fight outside of China. Interestingly it will also be Tanaka’s first world title bout in Tokyo, ​and sees him fight in the Kanto region for the first time in more than 5 years, having previously won the OPBF title in Tokyo in 2014 against Ryuji Hara.

One other interesting sub story here is the fact Tanaka has previously spoke about facing Ioka in the future, and this show could serve as a launchpad for that potential showdown in 2020, or whenever Tanaka moves up in weight, which is expected to be sooner rather than later.