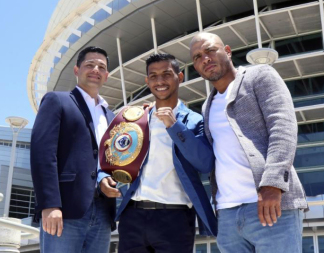 Integrated Sports Media will distribute the La Batalla: Acosta vs. Buitrago card in the United States on cable, satellite and digital pay-per-view via iN Demand, Vubiquity, DIRECTV, DISH and live-streamed worldwide (excluding Puerto Rico) on the FITE.TV app and website (www.fite.tv), starting at 9 p.m. ET / 6 p.m. PT, for a suggested retail price of only $34.95

“Tito Acosta is that fighter you can’t blink your eyes,” promoter Miguel Cotto said. “He brings excitement to every fight and power to finish in any second. This fight against Carlos Buitrago will be fireworks from the opening bell.”

Acosta (17-1, 17 KOs), fighting out of San Juan, Puerto Rico., captured the vacant WBO title last December at famed Madison Square Garden, when he knocked out his Mexican challenger, Juan Alejo (24-4-1), in the 10th round.

A standout amateur boxer with more than 180 matches, highlighted by his gold-medal performance at the Central American Games, is a past WBO Latino and World Boxing Council (WBC) light flyweight champion. His most notable victories have been against 22-5 Juan Guzman (KO1), 12-1 Japhet Uutoni (TKO12), and 28-5-3 Luis Ceja (KO2).

“Buitrago says that his dream is to become the world champion, to that I say, keep on dreaming,” Acosta said.  “I’m not underestimating him, but this will be my night, not his.”

Buitrago (30-3-1, 17 KOs), 26, is currently world rated at No. 12 by the WBO. The Managua-native will be fighting in his fifth world title fight having lost three times with one draw. In his last match this past December, he was stopped for the first time in the eighth round by undefeated International Boxing Federation (IBF) Minimumweight World Champion Hiroto Kyoguchi (8-0) in Japan.

In fact, all three of Buitrago’s career losses as a professional have been to world champions, including a pair to Thammanooon Niyomtrong (11-0) in 2016 and 2014, both by way of 12-round unanimous decisions in Thailand for the Interim WBA title. Buitrago also fought a 12-round split draw in 2013 to then WBO Minimum World Champion Merlito Sabillo (12-0) in Manila, Philippines.

“I will enter the ring in the best shape of my life with one objective in sight: to fulfill my dream of becoming the world champion and give my country a historic win,” Buitrago commented.  “The battle is on and I hope to come out victorious.”

Additional June 16th PPV fights will soon be announced. All fights and fighters are subject to change.