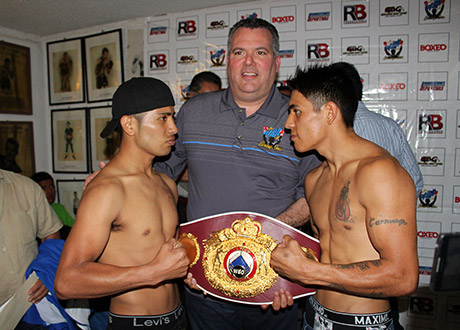 WBO Youth champion David “El Duro” Carmona (17-2-4, 8 KOs) of Mexico City, Mexico takes on countryman Martin “Pini” Casillas (14-3, 8 KOs) of Cocotitlan, Mexico this Friday. The bout will be scheduled for 10 rounds with only the WBO interim Latin super flyweight title at stake. Telemundo Ford with air the main event with the site of the fight being the Salon Jose Cuervo in Mexico City.

Carmona is a very recent familiar face to the Telemundo Network audience. He will be headlining now for his 4th time on Telemundo air in a year and half span. Carmona came up short in his first bid for a world title last December losing to world champion Omar Narvaez. Carmona returned from that loss this past July on Telemundo and rebounded with a solid victory over Ricardo Rodriguez. Carmona is again fighting in front of his home fans and is ready to exciting performance.

What can you tell us about your opponent Casillas and his style of fighting?

Casillas and I are familiar with each other having sparred together. His style is more of toe-to-toe, where I am more of a boxer/puncher.

Do you think having sparred with each other that there is an advantage for either of you?

I don’t see it that way as sparring and a real fight are totally different.

Casillas has fought as high as super bantamweight. Two full divisions above your contracted fight weight for this fight. Do you see him looking to impose his size advantage on you?

He may be the naturally bigger guy and look to exchange more with me. I am more of a boxer but I will exchange if necessary or pressed to do so during the fight.

You are both from Mexico, in fact both of you are actually from Mexico City, the site of the fight. Any pressure fighting at home?

I enjoy fighting at home. I’m very comfortable here. He has a decent fan following here as well so there won’t be a hometown advantage for me. I honestly think the crowd will be divided cheering for us both.

After your recent world title fight loss do you feel that you need to get some more solid wins before another opportunity a world title?

I don’t think about it much. I’m happy I had the opportunity and got the experience from the fight. I don’t look too far ahead. Right now my most important fight is this Friday and that’s what I’m focused on. I’m coming to win and give the fans on hand and the fans watching an exciting fight.