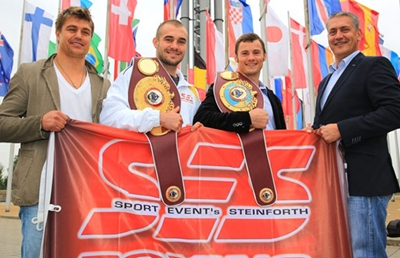 “This is my last title defense of the year,” said Steiglitz at today’s press conference. “Leipzig is a special city for me. It’s not far from Magdeburg and I have a lot of fans…we did preliminary analysis of the challenger Isaac Ekpo. He’s aggressive and muscular. I’ve been working a lot with my legs and speed. My Teammate Jan Zaveck invited me to spend two weeks at a training camp in Ptuj, Slovenia.”

Regarding his WBO mandated defense third fight against Arthur Abraham, Stieglitz stated, “That’s quite normal and I’m happy about it. As world champion I must box everyone anyway.”

Trainer Dirk Dzemski added “I’m very pleased with Robert this year, especially that he came away without injury from the fight against Kiyota. Now comes the hot and stressful phaseof the preparation, the training camp in Slovenia. One thing is certain, it will only be a vacation for me (grins). Isaac Ekpo is hungry, can hit hard – this will be an exciting thing that you must take very seriously.”

SES promoter Ulf Steinforth stated: “Leipzig is something special. We’ve had the city on our list and now we bring the best of what we have. We anticipate 6,000 spectators and with the new seating system, we can expand capacity quickly. The next fight against Ekpo is difficult enough for Robert. Ekpo is the current #7 in the world rankings. That’s why we can’t make any further plans. Dominic is a worthy captain of Team Germany. That a competition is emerging within Team Germany is, of course, good. We’ve proved that there are very talented young boxers and it’s fun to promote and to see them. Robert is currently the boxer with the most fights, a true role model, a mentor for Team Germany, which is what I’m most proud of. In Leipzig we’ll have Team Germany, Jan Zaveck and the newly added IBF flyweight championship completing the card. Out of eight fights we will have four title fights.”

Ticket sales will start at the end of the week.