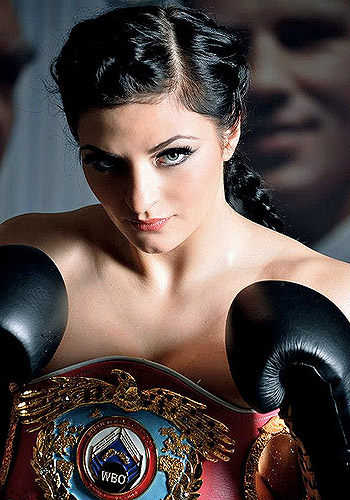 Despite female boxing being an official part of the international Olympic Games and ever increasing amount of female professionals possessing in-ring skills that can rival their male counterparts ladies boxing is still struggling to maximize its potential. Blame it on lack of proper promotion, blame it on mismatched bouts or blame it on the fact that if and when a female fighter becomes a top draw their management team refuses to let them stray far from home. Only a select few ladies have been known to travel for their fights and become successful in doing so.

There is one female fighter right now that is on the cusp of being able to elevate ladies boxing to the next level and go anywhere necessary to accomplish that goal, one who has won world titles on the road, has a complete skillset, is seeking out the best names possible, has beaten the best in and around her division while looking to broaden her horizons by making a U.S. debut if she can get a worthy opponent. Her name is Christina Hammer.

Unlike a certain few other top female fighters over the past 5 years who managed to become part of boxing’s active “Pound for Pound” list without going further than a rocks throw away from home and shall remain nameless right now Hammer is a proven commodity no matter where she fights. Born in Novodolinka, Kazakhstan, residing in Germany where her manager Ulf Steinforth is based out of Christina has journeyed from home to win championships in Slovenia and made defenses in the Czech Republic.

Hammer has not only faced but beaten in dominate fashion 5 former or current world title holders, and 3 former world title challengers in her 15 professional fights. Those numbers mean over half her professional bouts have taken place on a championship level, something even a limited amount of male world champions can claim.

Now Hammer is ready to elevate her career to a new level as if her current accomplishments were not already enough. I recently asked Hammer what other currently active fighter in her opinion would be skilled and tough enough to push her physically since most of her previous wins have been dominate. The name of unbeaten current WBF Super Middleweight champion, Nikki Adler (Adler won the vacated WBF Super Middleweight Belt on May 25, 2013 with a decision win over Zane Brige) is the one that surfaced immediately, though according to Christina there seems to be an issue in getting the fight made.

While waiting for Adler I wondered what Christine thinks about possibly facing Cecelia Braekhus at a catch weight to declare a definite front runner in the ladies division since Braekhus seems to be a media favorite. I also inquired about Anne Sophie Mathis (currently the WBF Super Welterweight World Champion) who like Hammer is a multi-division champion and similar in size. Both names are ones Christina not only wants to face but feels they are names she needs to defeat so she can be considered the best female fighter in the world.

“Those two opponents are in my range and sights. I need to fight them ASAP!!! I want to be the considered best female fighter around! I had my step up to Super Middleweight and show I can be successful in more than one division but now I am back at Middleweight, closer to Anne Sophie’s weight class. We are similar in size and this fight can be made. Plus being back at middleweight is not only better for my fitness but figure”

While Christina made it clear Nikki Adler is who she wants next she will fight whoever is needed to be recognized as the world’s best active female fighter. She also made it clear that to become a household name among boxing fans

“I need to step to the States to show my skills to the American boxing fans”. Everything she stated to me and everything she has accomplished thus far makes me think Christina Hammer is the real deal. Hammers added good looks are a bonus for her followers, now it’s time to play the waiting game and see exactly who will take her up on the challenges she has thrown out publicly.

Every male fighter who has ever reached super star status has done exactly what Christina has and demanded they fight the best just as she is demanding. If the challenges are answered and Hammer manages to make these fights happen in the United States on international television I have no doubt she can elevate female boxing to the next level.

Now I am going to sit and wonder what if any promoter is smart enough to utilize her desire for success. It would not only benefit female boxing but the sport as a whole, we can never have too many superstars fighting at an elite level. Especially ones willing to sort out the difference between legitimate and manufactured.