Nathan Cleverly: ‘Krasniqi is Potentially the Best I’ve Faced; Gritty, Strong and Prepared to Fight on the Front Foot. It Should be Very Interesting’ 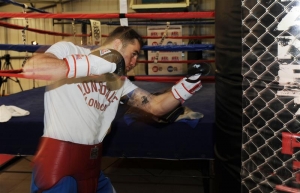 The time has come for WBO World Light-Heavyweight Champion Nathan Cleverly to finally stake his claim as the world’s leading light-heavyweight. On Saturday evening the boxing boffin – a maths graduate from Cardiff University – headlines Frank Warren’s huge ‘Rule Britannia’ promotion at Wembley Arena in a tough mandatory defence against rising German based Kosovan Robin Krasniqi.
And the 26 year old is aware that an impressive victory could vault him into a Transatlantic superfight with IBF counterpart Bernard Hopkins this summer.

The whole card, which also features the comeback of Dereck Chisora plus Liam Walsh against Scott Harrison and Paul Butler, is live and exclusive in the UK, on BoxNation, the Channel of Champions, from 7pm on Saturday evening.  Join at www.boxnation.com

Boxing writer Glynn Evans found ‘Clev’ in rude health and chomping to meet the challenges when they spoke at length on the weekend.

You concluded a difficult 2012 campaign in style by destroying Sioux Indian Shawn Hawk in eight rounds at the Staples Center in Los Angeles to retain your world title for the fourth time. Did the US exercise fulfil your intentions?

Absolutely. I thought it was a great idea to defend my belt and start planting seeds over in America. The whole US experience was fantastic and I’d like to think I made the most of my opportunity, let the US fight crowd know who I am, see me first hand. Previously, I was pretty unknown over there.

First and foremost, I put in a good performance. I’ve always had quite an Americanised style, anyway. I got terrific exposure on a Golden Boy promotion and Showtime TV and I received great feedback from the likes of Oscar De La Hoya and Richard Schaefer. I also did some sparring at the Wild Card gym in Hollywood and hear that (leading coach) Freddie Roach was impressed with what he saw.

BBC Wales followed me around all week and I felt a bit like a movie star, chilling with (actor and ex pro) Mickey Rourke – a real boxing nut – and (Welsh singer) Tom Jones. Quality! They were in my dressing room before and carried my belt in. I enjoyed the glitz and glamour but always made sure I kept my eye on the job at hand.

That was five months ago. What did you get up to in the interim before you began training for your mandatory?

You can get soaked up with all the pressure of fights and training so it’s nice to enjoy life and take advantage of my belt whilst I can because I’m sure it won’t last for ever. Presently, I enjoy a lot of invites to sporting events such as Cardiff City or the rugby internationals, or music concerts. I’ve also done quite a bit of charity work which can be very rewarding. Away from boxing, I’m quite laid back and live a pretty normal life.

For me, Karo Murat, the previously unbeaten German who you beat in a WBO eliminator prior to winning the world title, remains your stiffest opponent to date. Fair comment?

On paper he probably was. He was undefeated in 22 and came with quite a big reputation but, in reality, I made quite an easy night’s work of him. I was on my game and dominated him, pretty much won every round before stopping him.

(Nadjib) Mohammedi, who I outpointed to win the ‘interim’ title gave me a harder night because I wasn’t 100% mentally and was very laboured that night. Mohammedi, who let’s not forget was world ranked, provided a tricky test. Not only was he a late replacement, he was also extremely fit and very, very awkward.

When I fought (Tony) Bellew in his home town, he was really fired up, really gave it 110%. I had to be switched on and fight smart that night. So my world title fights with Mohammedi and Bellew were harder than Murat, definitely.

Your former victim and arch rival Tony Bellew is now number one contender for the WBC title. What did you make of his draw with Isaac Chilemba in their final eliminator the other week?

I couldn’t care less about Bellew, his performance, or anything he says. I’ve beaten him and now I’ve no interest in him whatsoever. I’m far too busy focussing on my own career, my bright future.

Saturday’s ‘Rule Britainnia’ promotion was postponed for five weeks. To what extent were you required to adjust your preparations? Have you incorporated anything new into your routine?

Prep has gone okay. Delays are a part of boxing. When the news of the delay broke, I just eased off the gas for a week or two and enjoyed a welcome bit of junk food! I do like my curries, pizzas and Chinese plus a Magners with ice! When the time came to step back on it, I was refreshed.

The only thing I’ve really changed has been my environment. Earlier in the year, not really as part of the camp for this fight, I went to a mate’s gym in Alicante in Spain for a bit of warm weather training, mixed in with a bit of a holiday.

Recently, for a change of scenery, I’ve been training at (coach) Don Charles’ gym in London. It’s taken me away from my home comforts which helps keep the mind fresh. I’ve done a bit on the pads with Don and I’ve been sparring big ‘Del’ (Chisora) who’s a very strong, heavy guy. It keeps me on my toes and gets me accustomed to additional weight. You can’t afford to take one of his swinging hooks so I have to stay sharp. He uses me for speed work. It’s productive, respectful sparring that benefits us both.

Mandatory challenger Robin Krasniqi seems primed to provide your toughest fight thus far. What have you seen of him? What qualities will you need to be mindful of?

You’re right. Potentially, he’s the best I’ve met. He’s young, he’s worked hard to get himself into the mandatory position and he enters with a lot of momentum. His two defeats both came in his first three fights when he was still only a teenager and he’s since won 38 straight and knocked out his last four in title fights. As I’ve said, the unknowns can be very dangerous and Krasniqi seems super hungry.

I’ve always been one to focus more on getting my own game right than wasting too much time worrying about opponents but I’ve seen bits of him on You Tube. He’s a typically upright Eastern European who leads off with the jab and has a big uppercut. A few of his recent knockouts have come with that. He seems gritty, strong and prepared to fight on the front foot. It should be very interesting.

But I’m world champion so I have to expect to face challenges like this. The convincing win that I have planned will prove my status as a worthy world champion.

He appears to have riled you in the build up with certain comments that he’s made about you being the weakest of the reigning 175lb champions. You responded that you’d ‘smash him to bits!’ As against Bellew, it appears you need a bit of ‘edge’ to stoke your fire.

That’s correct. I almost manufacture it.  I think it was just a sign from Krasniqi of how badly he wants to beat me. But I’ve worked extremely hard for my title so I get defensive and use any negative comments to fuel my motivation, put a bit of fire there which will give me an extra few per cent to take into training every day. He intends ripping my title from me, I’ll be doing every thing I can to protect it.

Do you feel there’s an expectation for you to not only retain on Saturday but to win impressively?

First and foremost, I have to make sure that I get my arm raised. If anything, I need to be mindful of not trying too hard. It’s my natural way to excite so I just have to try and let that flow. I’ve prepared correctly, physically and mentally and now I just need to apply it all in the ring on Saturday night. That’s what being a champion is all about.

A good night’s work would constitute remaining as world champion and on course to unify. Come Sunday morning, I want to be reading some positive headlines regarding a solid victory over the mandatory challenger.

Provided you come through, the fight everybody is keen to see is a unification match between IBF king Bernard Hopkins and yourself. However, a second mandatory with German southpaw Juergen Braehmer could present a stumbling block to that.

That’s true but, deep down, I’m not sure that Braehmer wants to fight me. He’s withdrawn from fighting me at the last minute before. He should stay as a successful European level champion. I’m hoping we can work around it but, look, if I have to fight him, I’ll do it.

What was your assessment of Bernard Hopkins’ recent history making title win over Tavoris Cloud?

I only watched about six rounds of the fight because it was obvious what pattern was developing. Hopkins made it look very easy because of his technical superiority. His ring craft and movement made Cloud look distinctly average. Hopkins came in with the right hand, scored his point, then nullified Cloud’s attacks. Cloud was very limited but Hopkins executed a perfect game plan and, for once, looked good doing it.

A superfight between BHop and yourself has long been mooted. What gives you encouragement that it could finally be made?

It’s been stewing for a while but I do think we’re gradually getting closer because its importance has grown. He’s starting to mention my name. I think we both want to unify the division and now we both have belts. Provided I come through on Saturday, I think it’s definitely the biggest fight in the division. He’s a sure fire Hall of Famer whilst I’m the up and comer who brings excitement.

After Krasniqi, I’ll definitely be pushing for my first superfight. I’d love it to be at the Millennium Stadium but I’m happy to travel, if that’s what it takes. I’ve always enjoyed my experiences in the US. We can do it wherever makes best business.

Why are you confident you could beat a fighter of Hopkins’ calibre?

My youth would be a massive factor. I also believe I’m the more natural light-heavy.  Has Hopkins ever beaten an opponent with my speed and my engine? My attributes are similar to Joe (Calzaghe)’s and Joe beat him.

I’m sure you’re keeping an eye out on the current fantastic crop of super-middle champions such as Andre Ward, Carl Froch and Mikkel Kessler, should they get bold and move north.

Oh yes. Ward is absolute quality. For me, he’s in the top three ‘pound for pound’ at the minute. He’s got fantastic technical skills and timing but it’s definitely a fight I’d take if it was offered. You have to challenge yourself against the very best.

If Froch comes through Kessler that would be a great fight for the British public but Carl’s ego won’t allow him to move up and fight me.  Andre Ward schooled him and Andre Dirrell schooled him. Any top fighter who can box and move beats Carl Froch comfortably.