Re:      WBO JR. MIDDLEWEIGHT CHAMPION-SHOW CAUSE

Your fighter, Mr. Andrade, won the Vacant WBO Junior Middleweight title against Vanes Martirosyan at an event held at the American Bank Center in Corpus Christi, Texas, on November 9, 2013 and has defended his belt only once— more than a year ago— on June 14, 2014 at the Barclays Center in Brooklyn, New York against Brian Rose.

On September 10, 2014, this WBO World Championship Committee ruled in your favor upon receiving a petition to allow Andrade to move up in weight and immediately vie for the Vacant WBO Middleweight Championship of the World against Matt Korobov, giving sides fifteen (15) days to reach an agreement. At the end of that negotiation period on September 25, 2014, it came to our knowledge that Mr. Andrade was interested in defending his Junior Middleweight title and, therefore, wanted to stay within his division and no longer compete for Middleweight title. Mr. Andrade was next scheduled to defend his belt against Jermell Charlo on December 13, 2014 at the MGM Grand in Las Vegas, Nevada, but an agreement was never finalized and Andrade pulled out of the fight on November 17, 2014.

Then on January 23, 2015, we wrote to the both of you again advising that parties had thirty (30) days to negotiate an agreement for the WBO Junior Middleweight Championship bout between Mr. Andrade and Jermell Charlo and that a purse bid would be called if an accord was not reached within the time frame. WBO President Valcárcel subsequently received email correspondence from Mr. Pelullo on February 19, 2015 informing us that Charlo elected not to fight Andrade, but that Stephen Espinoza of Showtime was looking into Erislandy Lara as a challenger to Andrade for a date in April, but in any case no later than May.

On April 15, 2015 WBO President Valcárcel wrote to the both of you asking for confirmation of Mr. Andrade’s plans and informing that while the WBO was originally willing to allow a voluntary defense of the belt, the Junior Middleweight division could no longer be kept inactive and that a mandatory defense was in order. Mr. Pelullo promptly responded and advised that he was to meet with Mr. Andrade during that same week and that a June 29 date was set aside, potentially against Liam Smith. President Valcárcel again followed up with you on May 12, 2015 advising you of Section 20 of the WBO Regulations of World Championship Contests— PROCEDURE WHEN A TITLE IS DECLARED VACANT— and requesting that you provide the WBO with contracts for the next Andrade bout within a period of forty-eight (48) hours.

As you can see from the above, the WBO has been more than lenient with Mr. Andrade, but he has clearly been inactive and the WBO must enforce its rules. For this reason please be advised that you have a period of ten (10) days upon receipt of this communication to show cause as to why Mr. Andrade has not defended his belt under the terms of the Championship Regulations. Failure to comply with this requirement will immediately result in the WBO Jr. Middleweight Title being declared vacant, without further hearing you. 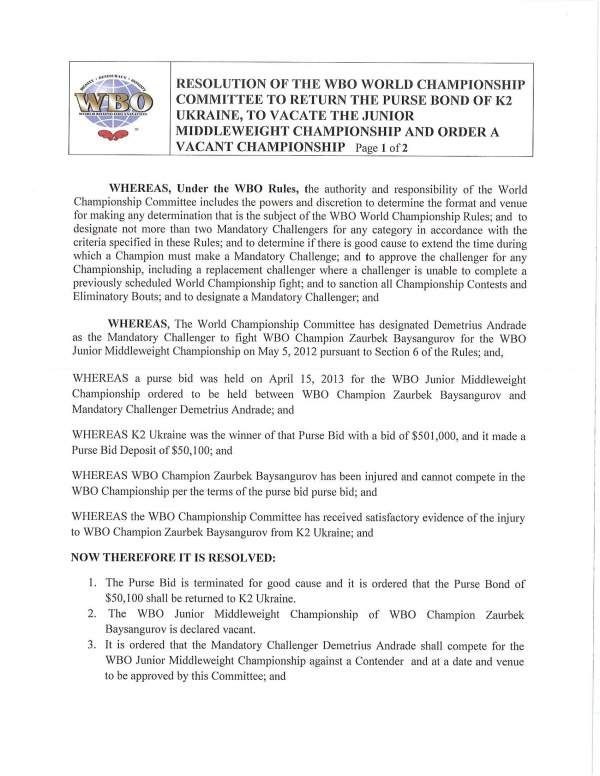