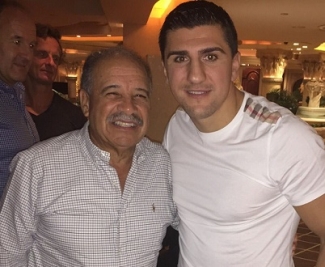 Marco Huck (38-2-1, 26 Kos) has arrived at the Mecca of boxing. The reigning WBO-Cruiserweight World Champion has touched down in Las Vegas, Nevada after a 14 hours flight.

But the 29-year-old didn’t travel to Sin City to try his luck at the slot machines. Instead he will attend the 27th annual Convention of the World Boxing Organization (WBO) which this year is being held at Caesars Palace until October 31st.

Other guests of course include the president of the organization, Paco Valcarcel, as well as boxing greats and former champions Joe Calzaghe and Oscar De La Hoya. Huck is especially looking forward to meet the latter of the two. Back in 2002, De La Hoya founded his own promotional company, Golden Boy Promotions, which has become one of the biggest players in the boxing industry.

“Oscar has already done, what my brother Kenan and I are intending to do now”, said Huck. “In order for him to take control of his own future he parted ways with his former promoter as a reigning champion, and has since turned into one of the most powerful people in the sport. Therefore I am sure that he can give me some great input.”

And this advice could immediately prove to come in handy when the “Käpt´n” and his brother discuss future challenges with other attendees at the Convention.