Sauerland: Everything Points To Stieglitz-Abraham Trilogy 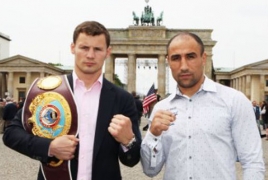 Promoter Kalle Sauerland of Sauerland Event is already getting prepared to get the ball rolling on a trilogy encounter between WBO super middleweight champion Robert Stieglitz (44-3, 25KOs) and former beltholder Arthur Abraham (36-4, 28KOs).

Last August, Abraham won a close twelve round decision over Stieglitz to capture the title. But then last Saturday in Magdeburg, Stieglitz got revenge with a fourth round TKO of Abraham. King Arthur’s left eye was swollen shut after three rounds of action and the ringside doctor stopped the fight when the fourth round began.

“The score is 1:1, and everything is pointing for the need of a third fight. I think [the third] fight could be even better. We are pleased to carry out a third. By the way, Robert himself said the same thing after the [rematch],” Sauerland said.