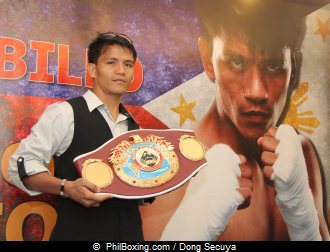 CEBU CITY – Merlito “Tiger” Sabillo was formally presented as the new WBO mini-flyweight or minimumweight world champion during a press conference held today at the St. Mark’s Hotel. Sabillo, who won the interim 105 lb division title last month in Colombia by 8th round TKO against Luis dela Rosa, is the second reigning world champion from the ALA Gym of Cebu.

In the April 2013 rankings of the World Boxing Organization, Sabillo (21-0, 11KO’s) has been elevated to regular champion status. The former champion in his division, Moises Fuentes of Mexico, remains the number one challenger of Sabillo’s stable mate, Donnie Nietes, who is the WBO lt.flyweight champ.

ALA Promotions CEO Michael Aldeguer plans to stage a fight for Sabillo sometime July or August possibly in the fighter’s hometown of Bacolod City. There is also the option of making him fight abroad. ALA Promotions is set to stage a card in San Diego, California this year.

Sabillo’s sensational victory in Colombia was the topic of WBO boxing insiders in Macau days before the Brian Viloria-Juan Francisco Estrada WBO flyweight title bout. Those who have seen the fight are still in awe of Sabillo’s performance and predicted that he will be one of the great champions in the lower weight categories.

Sabillo’s number one contender is Denver ‘The Excitement’ Cuello of Iloilo which leaves the door open for a possible ‘Ilonggo Civil War’.

“Boxers will fight whoever our managers tell us to fight,” Sabillo said, “If it’s against another Filipino, it’s OK with me.”

“If it happens, who not?” Aldeguer added, “But are Filipino fans ready for a Filipino fighting another Filipino?”

Sabillo had to travel for almost two days and sleep in airports enroute to winning the title. When asked how he relaxes himself before the big fight, Sabillo said that “I just pray. I know that when I fight inside the ring, God is always there.”