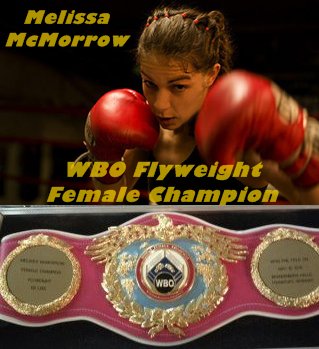 Melissa McMorrow will make the second defense of her WBO flyweight title this Saturday in Magdeburg, Germany, against Nadia Raoui, on the EPIX-televised Arthur Abraham-Robert Stieglitz undercard.

Though McMorrow (8-3-3, 1 KO) will be invading Raoui’s hometurf, the 31-year-old San Francisco resident is far from intimidated, having traveled to Germany and defeated Susi Kentikian for the belt in the first place.

In fact, McMorrow released this statement after a camp that included sparring with 2012 Olympic bronze medalist Marlen Esparza: “I have been training hard for this fight and have had great sparring with experienced fighters in my area.  My strength has improved a lot and I have been working on two major punch combinations; the first called the ‘Tyson’ and the second called the ‘Marquez’.  Please use your imagination on what these might be and tune into the fight.”

McMorrow, one of an astounding three world flyweight titlists based in Northern California (Ava Knight and Carina Moreno being the other rightful holders), will be faced with the task of using her signature pressure to slow the mobile Raoui (15-1-1, 3 KOs) down.

Eddie Croft, a former three-time world title challenger who once traded leather with Erik Morales, Marco Antonio Barrera, and Tom Johnson, trains McMorrow out of the B Street Boxing Gym in San Mateo, Calif.  The cornerman and her fighter spoke to BoxingScene.com from their hotel in Germany via phone.

BoxingScene.com: This is your second trip to Germany.  What did you learn from your first voyage overseas as far as do’s and don’ts?

Melissa McMorrow: It’s been good, because I signed with a promoter here, SES-Boxing, so everything’s been comfortable.  But there has been a little more downtime than I would like.  But it’s nice to be in town, and this is a big event here, with Abraham-Stieglitz.  I think it’s already sold out.

Eddie Croft: This time, we’re actually going to be here two days longer than last time, so the last time last May, the first day we got our bearings together, the second day was the press conference, the third day was the public workout, day four was the weigh-in, and day five was the fight.  This time we got there Sunday morning, nothing.  There was a press conference, nothing.  We worked out in a gym yesterday.  Today there’s nothing.  But it’s 29 degrees out there, so we’re just here holed up in the hotel.  We’ve just had a couple more dead days.

BoxingScene.com: Give us an idea of how camp went.

Melissa McMorrow: Camp was great.  We got good sparring from Marlen Esparza and people from our own gym.   I’ve developed my power, and my strength and conditioning have really improve, so I’m looking to knock Nadia out.

Eddie Croft: It was great.  We had a couple days to spar Marlen Esparza.  She was a lot better than I expected, and it was excellent work.  Usually I have to get guys to spar Melissa to get her up for it.  Marlen made her focus, and it was good.  She’s in great shape, and I haven’t been more confident heading into a fight.   She’s also gained a lot of confidence since winning the title.

BoxingScene.com: Has Melissa changed at all since winning the title?  The target is now plastered on her back, and she can’t just sneak up on unsuspecting opponents anymore.

Melissa McMorrow: I think when people watch me, watching what I’m doing is not the same as experiencing a fight with me in the ring.  It’s exhausting to fight me.  People recognize I pressure a lot, but I don’t think they’re prepared for how grueling that could be.  I think they misrepresent what they need to do to counteract that.  But I don’t think much has changed as far as who I am as a fighter.

Eddie Croft: We’ve always been a little overlooked, even in our area, and we still are somewhat.  Here in Germany, Melissa is known for beating Kentikian, the number one girl here.  She’s not underestimated at all here.  Melissa’s really confident and she feels there’s nothing Nadia can do to beat here.

BoxingScene.com: How do you stop a mover like Raoui in her tracks?

Melissa McMorrow: I plan to go to the body and cut off the ring.  Movers can only do it for so long, so I anticipate that the first couple rounds could be difficult.  I’ll have to track her down and move in on her, but after that, she’ll slow down, and I’ll be able to get to her.

Eddie Croft: The gameplan has always been the same.  Everyone’s always taller.  She always has to go inside and work the body to wear her opponents down, but I think Melissa’s improved a lot.  The punches are shorter.  The combinations are coming more naturally.  I have yet to see someone completely outbox her.  People always try, but sooner or later, they’re going to have to go head-to-head in trench warfare.

This is sacrilegious, and I’m not saying she’s Julio Cesar Chavez, but they’re similar in a way where people say I’m going to outbox them, but other than Pernell Whitaker, everyone said that, and they couldn’t.  So eventually, we’ll get there, whether it’s round one or round five, but by then, we’ll have the fight right where we want it.

BoxingScene.com: What do you hope to achieve on Saturday, other than the obvious objective of winning?

Melissa McMorrow: I always thought what women’s boxing needs is good fights, and if I do that, then everything else will follow.  For me, my own personal goal for this fight is that Nadia has fought Susi Kentikian.  Susi won it, but it was controversial.  So for me, I need a clear win.  I haven’t had the opportunity to get the rematch with Susi, but I need a clear win to show all the German fans that I’m a clear champion with no controversy.

Eddie Croft: I really hope Melissa gets a chance to be seen, especially in a fight like this.  If things go the way like I think they will, it’ll showcase what Melissa can really do. We’re excited about being on an event of this stature.