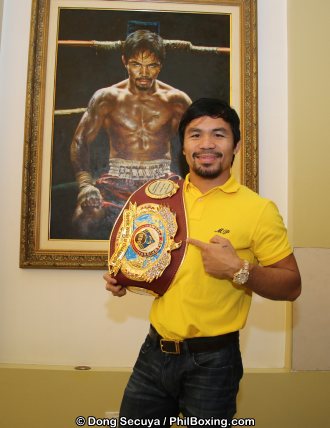 The $10,000 worth diamond-encrusted custom-designed belt was awarded by the WBO to Pacquiao after the world’s only 8-division world champion and the WBO champion of the decade wrested back his welterweight crown from Timothy Bradley on April 12, 2014. According to Panoncillo, WBO president Francisco ‘Paco’ Valcarcel wanted to have the belt given to Pacquiao earlier but scheduling conflict and Pacquiao’s hectic lifestyle contributed to the delay. “This is great for the unification!,” Pacquiao, who has tendered a dinner for the WBO and selected guests, blurted out upon receiving the belt to the amusement of everyone present knowing that an elephant in the room – the highly desired and highly anticipated Pacquiao-Mayweather welterweight unification bout for the WBC and WBO belts – casts its huge shadow. Pacquiao later enthralled everyone by discussing the details of his one-on-one meeting with Mayweather and the many details of the ongoing negotiation. “But this is off the record,” he said.