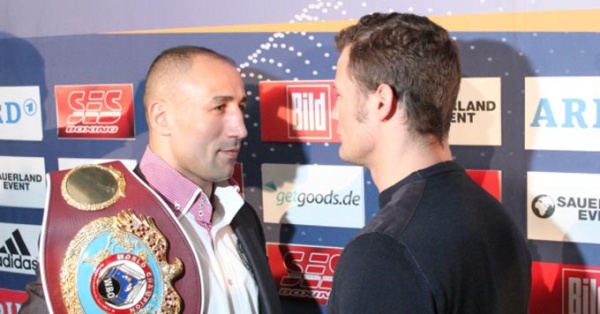 NEW YORK (March 4, 2013) — World championship boxing returns to EPIX this month. Two- division world champion “King” ARTHUR ABRAHAM will defend his WBO super middleweight crown against the former champion he dethroned, ROBERT STIEGLITZ, in a rematch of their “Fight of The Year”-contender of last summer. Abraham-Stieglitz II will be televised live ringside from GTEC Arena in Magdeburg, Sachsen-Anhalt, Germany on Saturday, March 23, beginning at 4:30 p.m. ET / 1:30 p.m. PT, exclusively on EPIX, the premium entertainment service. EPIX will stream the fights live on EpixHD.com and on the EPIX app on Xbox consoles and Roku players as part of a special free trial offer for boxing fans.

These two gladiators boast three world titles between them and a combined record of 79-6 (52 KOs) — a winning percentage of 93% and a victory by knockout ratio of 66%.

Abraham (36-3, 28 KOs), a native of Armenia who lives in Berlin, certainly lived up to his ring name, King Arthur, when he ruled the middleweight division as an undefeated world champion. He captured the vacant International Boxing Federation (IBF) middleweight crown in 2005, knocking out Kingsley Ikeke in the fifth round. He successfully defended his title 11 times – seven by way of knockout – during his four-year reign. The contenders he defeated as middleweight champion had a combined record of 298-18-6 when he fought them, including Shannon Taylor, Kofi Jantuah, Edison Miranda, Lajuan Simon and Raul Marquez. In search of bigger challenges, Abraham vacated his title and moved up to super middleweight to compete in the Super Six tournament in 2009. After knocking out former middleweight champion Jermain Taylor in the opening bout, he lost his next three and was eliminated from the tournament. In 2012 he righted his ship, knocking out Pablo Farias in the fifth round to claim the WBO European super middleweight title. Two fights later, he upset Stieglitz, winning an exciting 12-round unanimous decision. In his last fight, Abraham successfully defended his new title, knocking out Medhi Bouadla in the eighth round last December 15.

Stieglitz (43-3, 24 KOs), a Russian native who fights out of Magdeburg, Sachsen-Anhalt, Germany, enters his title challenge having won 12 of his last 13 bouts. Stieglitz captured the WBO super middleweight title in 2009, knocking out undefeated defending champion Karoly Balzsay in the 11th round. He successfully defended the title six times against contenders who had a combined record of 160-23-7 when he fought them during his three-year reign. He lost the title to Abraham last August 25. In his last fight, Stieglitz traveled to Barcelona, Spain and knocked out Michal Nieroda in the third round on January 26.

Helenius (18-0, 11 KOs), a native of Sweden who fights out of Berlin, Germany, boasts knockout victories over former heavyweight champions Lamon Brewster and Samuel Peter as well as top contenders Dereck Chisora, Siarhei Liakhovich, and Attila Levin en route to becoming the WBO’s No. 1 heavyweight contender. In his last fight, on November 10, 2012, he defeated Sherman Williams by unanimous decision.