Orucuta plans to rough up Narvaez 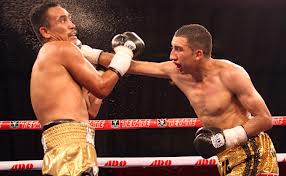 Early Tuesday WBO #1 Felipe Orucuta (27-1, 23 KOs) traveled from Mexico to Argentina with plans to pull off one of the biggest upsets when he faces WBO super flyweight world champion Omar Narvaez (38-1-2, 20 KOs) on Saturday at the famed Luna Park in Buenos Aires. “I’ll push Narvaez around the ring from the first round and we will win this fight. I will beat him so clearly, I’m not afraid of the judges if the fight goes the distance,” said Orucuta. “We have studied Narvaez very well and we have the proper strategy to beat him. I am well prepared and from the first second of the fight I’m going to go out to win round by round. It doesn’t intimidate me at all being in Narvaez’ homeland. It’ll be just him and me in the ring.”

Narvaez defended the WBO flyweight title 16 times and this will be his seventh defense of the WBO super flyweight belt.