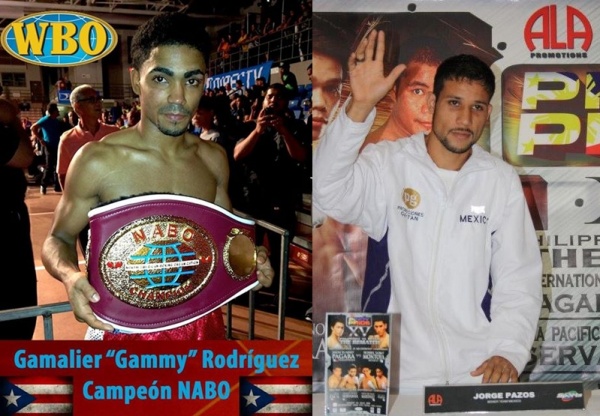 The tough kid from Guamuchil Sinaloa Mexico, Jorge ‘EL FEROZ” Pazos (20-5-13KO) will challenge the reigning WBO NABO Featherweight champion from Puerto Rico, Gamalier Rodriquez (21-2-15KO) this coming August 10 in the beautiful Sands Resort Casino in Bethlehem, Pennsylvania in a classic MEXICO vs. PUERTO RICO matchup under TOP RANK and BAM Promotions, with its famous UniMas’s SOLO BOXEO TECATE which will be televised all over the world.

This will be the third crack for a regional title as Pazos lost in a 12 round fight with Filipino Genesis Servania for the WBO ASIS-PACIFIC SUPER BANTAMWEIGHT CHAMPIONSHIP in Cebu City Philippines on August 18, 2012 with scores of 117-108 on all three cards of the judges.

Pazos also had a crack against Orlando Cruz for the WBO Latino Featherweight Championship this past October 19, 2012 in Kissimmee Florida, but lost to a majority decision with scores of 117-111 and 118-110 twice.

Team Pazos are in deep training as this fight will measure the career of Pazos. Team Pazos includes Manger/Trainer and father in law Miguel Angel Salazar and cutman Michael Angel Lopez as they will head into Pennsylvania on August 7.

Pazos was quoted as saying, “We will come into Pennsylvania and take the championship belt back to Mexico and make the Mexican people rejoice as we will come as winners over our rivals in boxing from Puerto Rico.”