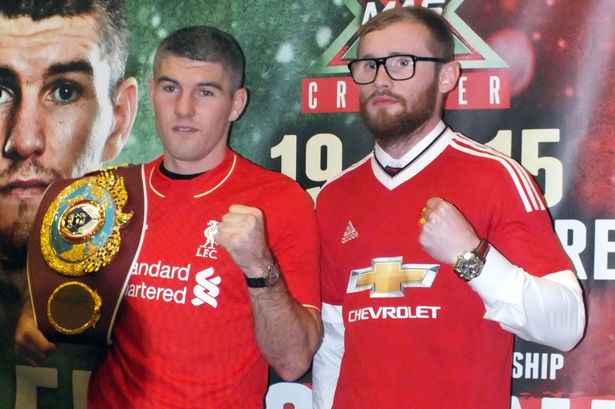 Wythenshawe boxer Jimmy Kilrain Kelly insists all of the pressure is on Liam Smith ahead of their world title showdown next week.

Kelly is aiming to become Manchester’s latest world champion when he faces Smith for his WBO light-middleweight title at the Manchester Arena on December 19.

The 23-year-old is seen as a big underdog in the fight, with many pundits expecting Smith to easily win the bout.

Kelly is happy to play that role though, and he believes it will be a much closer fight than what people are predicting.

“Let’s have it right, no-one is expecting anything from me. People think Smith will blow me out early but I’m young and guarantee I’ll arrive on December 19 bursting with heart and ambition,” Kelly declared.

“I know I won’t fold. I’ll rise to the occasion. When I signed with Frank Warren I said I wanted a world title fight and he delivered, so I definitely think I’m ready and I’m happy to jump in.

“Even if I were to lose in good style, it’s still a win for me as my stock will rise and I’ll gain plenty of experience.

“All the pressure is on Liam. He dismisses me saying I’m his ‘Christmas wages’ but I’ve been around boxing and boxing people since I was four years old.

“I believe I’ve the strengths to overcome him. My manager Lee Beard has been around Smith’s camp and he has identified a few shortcomings from his recent fights which we believe we can exploit.

“I’ve also derived a lot of confidence from all the hard work I’ve been putting in at the gym, and having Ensley Bingham and Maurice Core in my corner will certainly help.”

Kelly has burst into the spotlight in recent months after having spent the majority of his career competing on undercards of small shows, but he doesn’t think that will be a factor in the fight.

“Just because I wasn’t boxing on TV doesn’t mean I didn’t learn my craft,” he added. Bolton-trained Smith will be making the first defence of the title he won by knocking out American John Thompson in October.

While Kelly is expecting to win the fight, he still believes that Smith will be at his 100 per cent best come fight night.

“Liam’s a quality kid and is the best of the brothers in my opinion, so win or lose, I know it’ll be a very tough night for me,” Kelly continued.

“He’s very patient and cuts the ring off well and I don’t doubt for one moment that he will train really hard and turn up in shape.

“I’ll be massively focused though and
mentally he could be looking past me and arrive a bit flat, so it will be a big mistake if he does.

“December 19 will be my sister’s 25th birthday as well and I intend on delivering her a world title as the perfect present.”