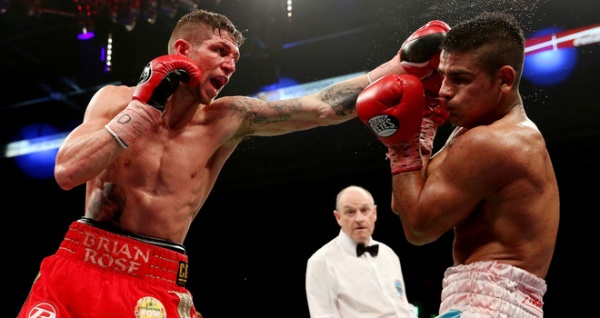 Brian Rose came through a gruelling contest to gain a split decision over Argentina’s Javier Maciel in their WBO light-middleweight eliminator in Sheffield.

It was a fight of contrasting styles with the wild Maciel providing most of the aggression, but Rose offering much the more accurate and considered work despite being on the back foot for long spells.

It was Maciel who was favourite with the bookmakers going into the bout, but Rose put down an early marker as he shaded the first behind some good work with his jab.

Maciel was much more aggressive in the second and was soon throwing big shots with increasing regularity forcing his rival to cover up. Indeed, Rose was doing most of his work on the back foot and trying to make his opponent miss.

Maciel started the fourth by landing with a crunching upper-cut, but Rose absorbed it well and continued to pop accurate if not powerful shots back to ensure he remained well in contention.

The Argentine finished the fifth with another barrage of shots and even raised his hand aloft as he made his way back to his stool. But, despite a nasty cut on the bridge of his nose, Rose’s spirit was by no means broken and he battled on gamely.

The eighth proved something of a turning point. Maciel launched a sustained and frenzied attack on his opponent and looked to have hurt his man having backed Rose up on the ropes.

But the Englishman took the South American’s best shots and then finished the round much the stronger and, by the time the bell sounded, Maciel’s barrage looked to have taken more out of him than his rival.

“You still haven’t seen the best of me, as I go up in levels the better I get. I’m happy with that performance, I’m more than happy. I’m over the moon.”
Brian Rose

It was Rose stalking his man in the ninth and he would go on to look the fresher over the course of the next couple of rounds.

The 11th proved to be almost an action-replay of the eighth as Maciel again hurt his man and unloaded relentlessly only to then be pegged back a defiant Rose.

The final round saw both men struggling wearily to have the final say, but despite Maciel’s best efforts it was the accuracy of Rose which prevailed in the eyes of the judges.

The victory earns Rose a crack at the winner of the fight between Vanes Martirosyan and Dmetrius Andrade who meet next month for the vacant WBO light-middleweight title in Texas.

A delighted Rose told Sky Sports afterwards: “I’m usually a pretty cool character, but I wasn’t cool when I got that decision – I burst into tears. I found it really hard at times – there were times when I had to dig deep. I’ve never had to do that before

“You still haven’t seen the best of me, as I go up in levels the better I get. I’m happy with that performance, I’m more than happy. I’m over the moon.

“I was a bit unsure, I thought I’d done enough, I thought I was up by three or four rounds.

Rose’s promoter Eddie Hearn added: “I thought that was a great performance. Maciel was the favourite going into the fight. I thought it was close, but he showed the heart of a lion.”