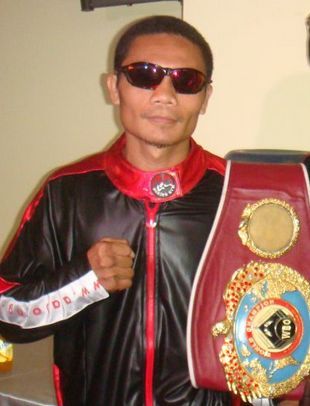 WBO light flyweight champion Donnie “Ahas” Nietes, who clashes in a mandatory rematch against Mexico’s Moises Fuentes at the Mall of Asia Arena on May 10 has looked impressive in training.

ALA Promotions president Michael Aldeguer told BoxingScene.com/Manila Standard  “Donnie is ready for this chance. It’s the biggest fight out there for Donnie. It will be a tough fight. I’ve never seen him work so hard – he trained in the US has a great conditioning coach now in Nick Curson and he’s ready to go.”

Aldeguer said Nietes who is chasing the record of the late junior lightweight champion Gabriel “Flash” Elorde who reigned as champion for almost seven-and-a-half years “ is really right up  there. This is a fight that is going to be defining is career. We are happy to bring it to the Philippines.”

He said Nietes “has to stick to the game plan. He has a good right – picks his punches” but was carried away in his first encounter with Fuentes when he “got into a brawl which is not his fight.”

Aldeguer disclosed that right now his trainers as well as Nietes  “are reviewing the tapes and looking at what he did right and what he did wrong”. He believes Nietes “has matured a lot. He knows that to make history this is the fight. If he wants to break the record of Flash Elorde this is the fight that will define him and his career.”

Nietes showed he had power when he dropped former WBC Silver champion Sammy Gutierrez three times en route to a 3rd round TKO at the  famed Araneta Coliseum and showed he has power.

Aldeguer noted that “early in his career Donnie was one of the biggest punchers we had in the stable and he then became a very calculating fighter. He knew how to win and became comfortable with that.”

Nietes understands that against Fuentes “ that he needs a convincing win and needs to dominate Fuentes and do the right things and I think he’s learned a lot. He is ready to go and it’s a fight for his life. And I think it wont be an easy fight  but I think it will define what Donnie really is.”

Aldeguer believes that if he followed the game plan in their first fight “he would have won easily. There is no question why he will not win” in the rematch.