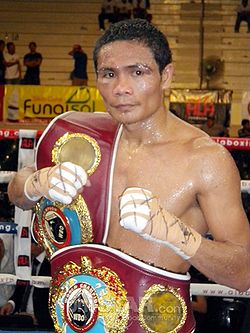 ALA Promotions president Michael Aldeguer told the Manila Standard that the cut was bad and Nietes “may need time for it to heal” noting that he originally suffered the cut in his title defense against Felipe Salguero.

Aldeguer said should a rematch take place it would have to be later, probably in July.

He said Nietes told him “the cut bothered him” as they reviewed the fight tape and he won’t risk a rematch until the cut “is fully healed.”

Aldeguer plans a tune-up fight for Nietes before a possible rematch with Fuentes even as he looked at the possibility of Interim champion Merlito Sabillo fighting Fuentes for the minimumweight title although there are strong indications that the Mexican could no longer make the 105 limit.

Should that happen and Fuentes relinquish his title then the WBO is likely to declare Sabillo as WBO minimum weight champion.

Meantime, Aldeguer told us that WBO No. 1 flyweight contender Milan Melindo “is in top shape” for his clash with Indonesia’s Tommy Seran and hopes to register an impressive win that would put him in line for a title shot at reigning WBO/WBA champion Brian Viloria who will also see action on the April 6 card in Macau against tough Juan Francisco Estrada of Mexico or against the champions of any of the other world organizations.