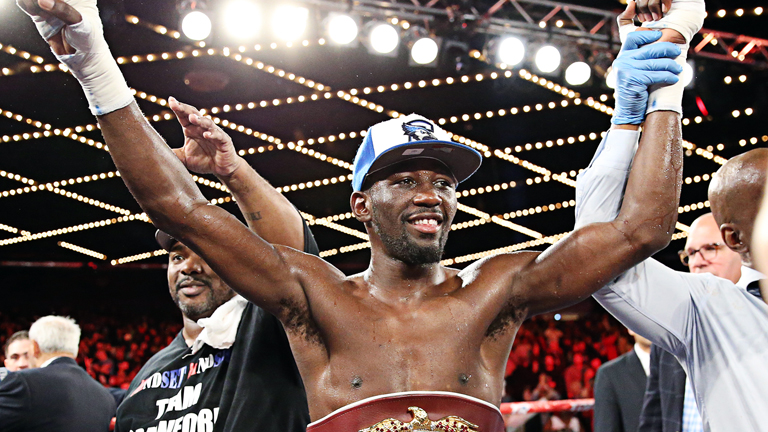 Terence Crawford showed exactly why he’s been earmarked as America’s next great prizefighter.

The unbeaten Omaha native defended his junior welterweight championship on Saturday night with a scintillating fifth-round TKO of Hank Lundy before a sellout crowd of 5,092 at the Theater of Madison Square Garden.

Crawford’s New York City debut wasn’t the step up in competition that he will ultimately need to reach the stardom he appears bound for. Lundy, who went off as a 10-1 underdog, was not the first or third or even fifth pick for Saturday’s B-side, only getting the call when initial invitations to better credentialed candidates were spurned.

But Crawford (28-0, 20 KOs) shined against the opponent in front of him, showing the rare blend of power, speed and tactical aptitude that’s vaulted him from obscurity into the pound-for-pound mix over the past two years.

“I told everyone I’ve got power in both hands,” he said afterward. “The boxing ability that I have, it’s going to take me a long way in this game.”

Lundy (26-6-1, 13 KOs) enjoyed his best success in the opening round, using his formidable hand speed and constant in-and-out movement to tag the champion with punches while making him miss. It was an awkward formula tailor-made to confuse the switch-hitting Crawford – who came out in an orthodox stance and briefly shifted to southpaw before switching back – but a frenetic pace that seemed impossible for Lundy to sustain for another 11 rounds.

Crawford relied on the jab to greater effect in the second and third rounds, controlling the distance and pace of the fight as Lundy began to slow. To the credit of the challenger, beset with disadvantages in size, power, speed and reach, he kept moving forward and gave a good accounting of himself.

Yet Crawford finally connected flush with left hand in the fifth that short-circuited Lundy’s equilibrium and sent him careening into the ropes. The champion opened up and dumped Lundy to the canvas with another left. Referee Steve Willis appeared to waver on permitting the fight to continue after issuing the standing eight count. He allowed it, but Lundy was not long for the match. Crawford quickly closed the show with another flurry of punches as Willis put a stop to it at 2min 9sec of the fifth.

“Lundy came out very strong,” said Crawford, who connected with 89 of 247 punches (36%), compared to 47 of 411 for Lundy (22%). “He had a good rhythm and good timing. It took me a while to figure him out because he was strong initially in the fight. Once I got his rhythm and timing down I was able to hit him with some really hard shots.”

The champion was particularly effective with the jab, landing eight per round, more than double the division average. Those shots helped set up the hook that finished matters. As lamented the 32-year-old Lundy, now a loser in five of his last nine: “He caught me with a good shot.”

Crawford, who earned a career-high purse of $1.21m (compared to $150,000 for Lundy), was non-committal when asked which opponent he targeted next. There are no shortage of options: WBC titleholder Viktor Postol, Ruslan Provodnikov, Lucas Matthysse, Mauricio Herrera had all been in play for Saturday’s fight before each passed for varied reasons.

A unification fight with Postol would no doubt be the fans’ choice, a difficult task Crawford appears open to.

“I never duck anyone and I’ll fight anybody,” Crawford said. “My manager will make the fights happen and and I will train and fight.” 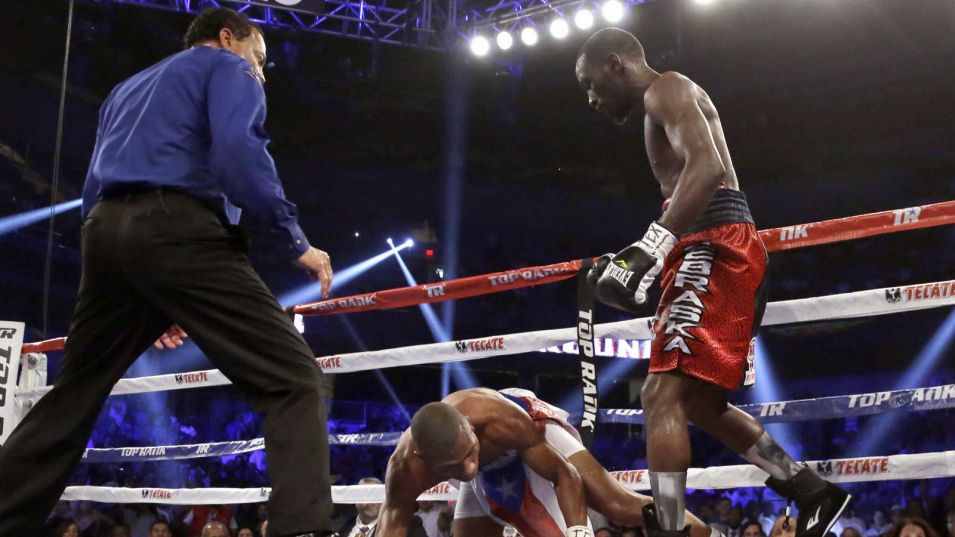 Terence Crawford knocks Thomas Dulorme down in the sixth round.

Soon after that, Crawford was a two-time WBO champion, winning the latest title in his first fight since moving up in class.

With Dulorme stunned, Crawford hit him again and knocked him down for the first time. Then Crawford delivered a flurry of punches, leading to another knockdown. When Dulorme got back up, Crawford unloaded again — and the fight was stopped as Dulorme staggered against the ropes near his corner.

“Basically a shot that I didn’t see, and the shot got me,” Dulorme said through an interpreter.

Crawford remained undefeated, winning as a heavy favorite in his first fight moving in the 140-pound class. He won the WBO lightweight title 13 months ago and defended in the 135-pound division twice in his hometown of Omaha, Nebraska.

The scheduled 12-round fight in North Texas came a week before Crawford, now 26-0 with 18 knockouts, is scheduled to be in New York to accept his 2014 fighter of the year award from the Boxing Writers Association of America.

After the fight ended, promoter Bob Arum shouted “That’s why he’s the fighter of the year!”

Dulorme, the 27-year-old Puerto Rican, is 22-2. He had won his last six bouts since moving down in class after being knocked out by Luis Carlos Abregu at 147 pounds in a welterweight fight in October 2012.

“It was a great opportunity for us,” Dulorme said. “It wasn’t the best night. We were winning in the cards, it’s something that basically happened. … We did the fight that we came here to do.”

Crawford seemed measured in his approach the first two rounds against the quick-starting Dulorme, who entered the ring wearing a gladiator helmet and breastplate. Dulorme was clearly the aggressor early against Crawford, who went with a red Nebraska Cornhuskers cap for his entry.

But in round 3, there was a quick exchange of punches, and later a hard body blow by Crawford.

There were times in the fourth and fifth rounds when Crawford either smiled or shook his head after taking blows from Dulorme. Crawford taunted him, and at the end of the fourth had him back into a corner and delivered two big rights.

Crawford was also smiling at the end of the fifth round, then came out in the sixth and ended the fight.

“Just having fun with it,” he said. “When I’m having fun, I don’t think nobody can beat me because that means I’m in my rhythm.”

Crawford’s trainer, Brian McIntyre, said the first couple of rounds were just a matter of Crawford getting his timing down. McIntyre said they knew the punching Dulorme would wear out, though he lasted longer than they expected.

Arum this week called Crawford a new superstar on the horizon, and said this fight a “very, very crucial first step” for Crawford to join the truly elite group of fighters.

Arum was at the bout halfway between Dallas and Fort Worth that came only two weeks before the long-awaited fight in Las Vegas between another of his boxers, Manny Pacquiao, and Floyd Mayweather Jr.

In an earlier eight-round lightweight matchup of previously unbeaten fighters, Ismail Muwendo from Minneapolis improved to 17-0 with a majority decision over Rolando Chinea from Lancaster, Pennsylvania. One judge had the fight as a draw, while the others had it in favor of Muwendo. Chinea dropped to 10-1-1.

Benjamin “The Blaxican” Whitaker from San Antonio improved to 9-1 as a pro with a unanimous decision over Skender Halili, a boxer from nearby Fort Worth whose had won each of his previous eight professional fights by knockout.