Lomachenko: I Was Preparing For Salido, But Ready For Marriaga 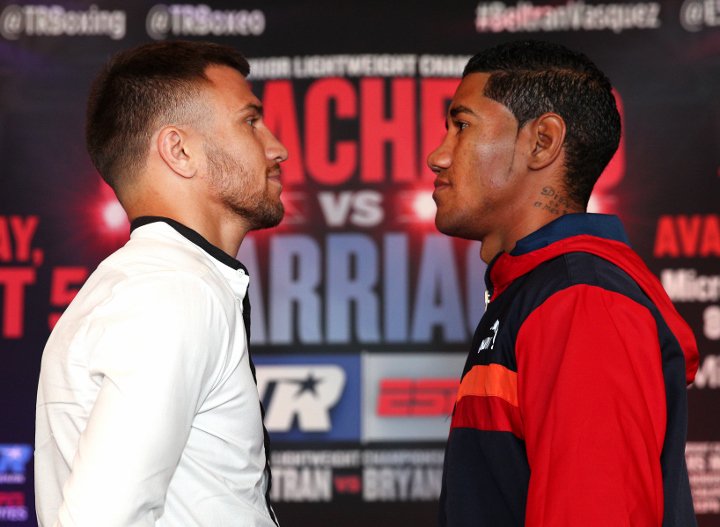 WBO Junior Lightweight champion Vasyl Lomachenko mentioned that he was fully preparing to face Mexico’s Orlando ‘Siri’ Salido in a long awaited rematch on August 5, but then he was advised that Salido was out – and Colombian Miguel Marriaga was placed in the contest.

Vasyl was eager to avenge the only loss of his pro career to Salido, and an economic agreement had been reached but an injury to Salido’s hand prevented the deal from being finalized, and then Marriaga, who comes back from a solid fight against WBO 126-pound champion Oscar Valdez, was thrown in the mix.

“It really has not changed anything in my preparation, I was preparing for Salido but the opponent was changed. You have to be ready for the opponent they put in front of you and you have to give a good fight,” said Lomachenko to ESPN Deportes. During the announcement of the card, Lomachenko (8-1, 6 KO’s) showed respect for Marriaga (25-2, 21 KO’s), who did the same, and promoter Bob Arum stressed that fights like this, and the one earlier this month with Manny Pacquiao and Jeff Horn.

“Boxing has been one of the major sports for many years, in the 1970s and 1980s, boxing was an essential sport not only in the United States but throughout the world. We’re working with ESPN to showcase these fighters and help boxing recover that top spot,”Arum said of the deal he had made with ESPN.

“We saw on July 1, Pacquiao-Horn’s ESPN broadcast had a tremendous audience, and Lomachenko and Marriaga, (Raymundo) Beltran and (Bryan) Vasquez will offer tremendous action to the public throughout the United States and the world, we are very proud to be part of this tremendous event.”

Finally, Marriaga expressed that he is not interested in the fact that Lomachenko is favorite. ”

It is normal that suddenly he is the favorite, he is the champion, but we are prepared, we come to fight, we’re coming to stage a war and God allows everything to go well,” he said.