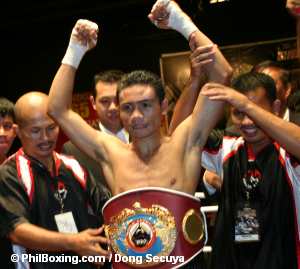 WBO president Francisco “Paco” Valcarcel, announced today the referees and judges who will work this Saturday, November 30, in the world title defenses of champions Sergey Kovalev, Merlito Sabillo and Donnie Nietes, to be held in Canada and Philippines, respectively.

At the Colisee de Quebec in Quebec City, Canada, the WBO Light Heavyweight champion Sergey Kovalev (22-0-1, 20 KOs) will defend his belt for the first time when he faces de #15 ranked Ismayl Sillakh (21-1, 17 KOs), from Ukraine. For this bout the referee will be Michael Griffin, from Canada. The judges for the Kovalev-Sillakh bout will be the Canadians Pasquale Procopio, Jean Gauthier and Benoit Roussel. The WBO supervisor for this fight will be John Duggan. While, the Araneta Coliseum in Quezon City, Manila, Philippines will host two world title fights. First, the WBO minimumweight champion Merlito Sabillo (23-0, 12 KOs) will defend his 105 pounds belt against the #1 ranked Carlos “Chocorroncito” Buitrago (27-0, 16 KOs), from Nicaragua. The referee for this bout will be Jack Reiss, from United States. The judges for the Sabillo-Buitrago bout are Takeshi Shimakawa, from Japan, Levi Martínez, from United States, and Joerg Milke, From Germany. The WBO supervisor for this bout will be Leon Panoncillo.