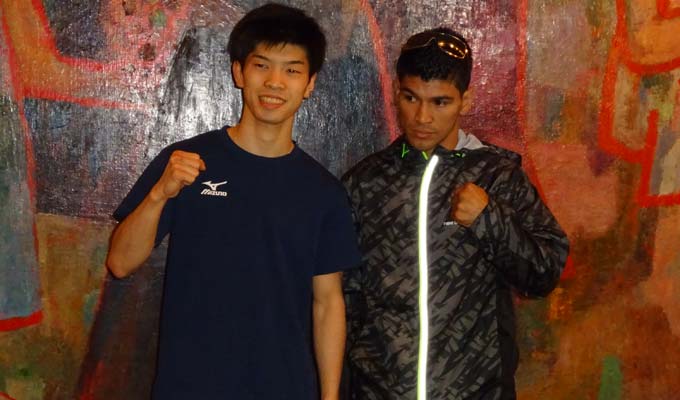 Report and Photo by Joe Koizumi

Tanaka, formerly a national high school champion, acquired the OPBF minimum belt–in his fourth pro bout–by halting undefeated defending titlist Ryuji Hara, then ranked #2 by the WBO, last October. Tanaka, as an amateur, had a grudge rival named Takuma Inoue, the younger brother of the aforementioned Naoya, but Tanaka scored three victories to two for Takuma in their five amateur competitions. Takuma Inoue entered the world ratings thanks to his upset triumph over Thailand’s Fahlan Sakkreerin Jr. by a lopsided decision in his second pro bout. Takuma, 19, will dispute the vacant OPBF super-fly belt against Filipino Mark Anthony Gerald on July 6. But this is a story on Tanaka, not Takuma.

It might seem crazy to wise experts that our prospects are trying to run a race to acquire a world belt as quickly as possible to demonstrate their vast talent. Are you Usain Bolt? But it is true that our mass media, in Japan, pays great attention to such a race of first come, first served.

It is ex-WBC super-bantam champ Kiyoshi Hatanaka that handles the Wonder Boy in Nagoya as his manager/promoter. He dethroned WBC ruler Pedro Decima but yielded it to Daniel Zaragoza, both in 1990. Hatanaka, the very first world champ ever produced in Nagoya, believes in his boy’s coronation on Saturday, saying, “Tanaka is going to score some remarkable achievements in the near future, and this is his first touchstone.”

Yedras, 27, has good credentials, and looks confident of his victory. The Mexican hombre once acquired the vacant WBC youth silver minimumweight belt by halting Ramon Pena in five rounds in 2011. He registered twenty-one consecutive victories from his debut and lost a decision to Carlos Bultrago in 2013, but scored three wins in a row since. Given Tanaka has talent, Yedras is blessed with experience. It will be a very sensational and competitive fight. Time will tell.