Bai Elorde: The Grandson rises to the occasion 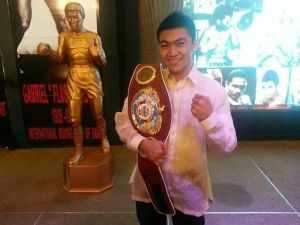 Juan Martin “Bai” Elorde has pressure bearing down on him last Monday as he made his way to the ring of the Sofitel Hotel in Manila. It was pressure that he carried from his training camp to the end of the 10th round of his fight against Maxsaisai Sithsaithong of Thailand.

And when his hand was raised by the third man in the ring and his name was announced as the winner, Bai Elorde felt a huge roll of steam exiting his system.

“Sobrang saya atsaka medyo nakahinga, kasi iyon nga, iyong pressure sa akin. Parang iniisip ko na dapat maganda yung ipakita ko, dapat manalo (I’m overjoyed and I was able to breathe, because of the pressure that was on me. I have to do well and win),” said the 28 year old boxer and grandson of one of the country’s ring legend, the great Gabriel “Flash” Elorde.

“Tapos nung nanalo ako, sobrang saya. Inisip ko agad na itong pagkapanalong ito ay para sa lolo ko (I am extremely happy when I won. My immediate thoughts are that, this victory is for my grandfather),” added the young boxer.

Bai Elorde defeated Sithsaithong via Unanimous Decision to capture the vacant WBO Asia Pacific belt in the night when his family and the country’s sporting elite celebrated the birthday and legacy of his legendary grandfather.

The feat did not come as a gift nor was it easy for the young Elorde; Sithsaithong according to him was not an easy nut to crack.

“Nakita ko na naging groggy siya pero matibay din, natatamaan siya pero hindi bumabagsak (I see that he was groggy but he is tough, he gets hit but he did get knocked down),” narrated Elorde of the fight.

Bai’s achievement was a befitting curtain raiser to the night’s bigger event, the 13th Flash Elorde Memorial Awards, the biggest boxing commencement ceremony of the country .

His parents, Johnny and Liza, his siblings, cousins and his grandmother, Mrs. Laura Elorde shared the joy that the young boxer enjoyed during that festive night. But his proud parents also reminded him that if he indeed wanted to follow in the footsteps of his “lolo”, then he should continue to work and train harder as he pursue his boxing career.

“Masaya sila na nanalo ako at sinabi rin nila na kailangang pag-igihan pa next time at mag-training palagi ng maayos (They are very happy at they advised me to do better next time and to train really well).”

Bai Elorde was a happy man all night as he proudly carried his belt in his shoulder as ring legends of past and present lauded him for his victory.

“Para sa pamilya ko ito at para sa Pilipinas itong belt na ito. Idine-dedicate ko ito sa kanila (This is for my family and for the Philippines. I dedicate this belt to them).”

And he knew that the proudest one of all is his beloved “lolo”, the great Flash Elorde who is undoubtedly smiling as he watched the night’s proceedings from the heavens.