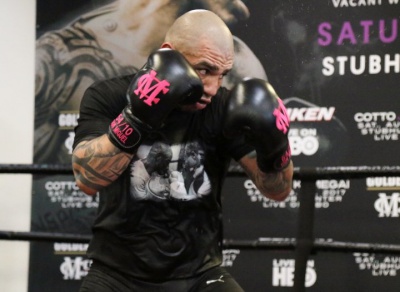 World renowned trainer Freddie Roach shared important details regarding the training camp of Miguel Cotto (40-5, 33 KOs), the only Puerto Rican boxer to ever win world titles in four divisions, as he prepares to go to war for the vacant WBO Junior Middleweight title against the Japanese slugger Yoshihiro “El Maestrito” Kamegai (27-3-2, 24 KOs). Cotto will attempt to obtain a sixth world title in four divisions and will appear on HBO for an astounding 23rd time. The event takes place Saturday, August 26 at the StubHub Center in Carson, California and will be televised live on HBO World Championship Boxing® beginning at 9:45 p.m. ET/PT. Roach, a Hall of Fame trainer who was supervising a recent sparring session at the Wild Card Boxing Club, shared Cotto’s training camp routine, which consists of:

Strength and conditioning at 5:00 am with Gavin McMillan (exercises are done either at the gym, pool, nearby hills or at the track).
Breakfast at around 8:30 am. (Cotto likes to cook all his meals himself; his diet is normal, avoiding fried food).
Light snack at around 11:15 am.
Sparring three days a week at 1:00 pm on Tuesdays, Thursdays and Saturdays.
Boxing routine on at 1:00 pm on Mondays, Wednesdays and Fridays.
Dinner at around 5:30 pm. Roach also provided additional training camp details, including the strategy for taking advantage of the exciting and crowd-pleasing style of Kamegai. “Kamegai [Yoshihiro] is very aggressive and I like that. I think it should make for a great fight because he’s coming forward all the time and always looking for a knockout. Guys who look for knockouts, get knocked out. So, we’re working on countering his attack, and it’s going really well so far,” Roach concluded. “I feel great, everything is working perfectly in camp together with Freddie and Gavin on every workout session. Freddie has a great game plan and I just follow him and do my best every day at gym. We look forward to have a big win” Miguel Cotto said. “For more than 16 years, Miguel Cotto has represented Puerto Rico. He has given fans incredible fights at a number of weight classes, and has won world titles in an astounding four divisions,” said Oscar De La Hoya. “Now, after nearly two years out of the ring, as he attempts to claim a sixth championship belt, we are fully expecting a tough war between him and Kamegai.