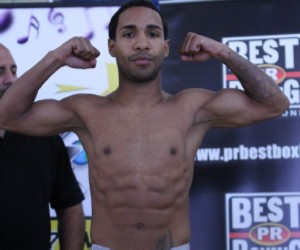 Super flyweight contender David Quijano was caught by surprise when it was announced that he would face the 115-pound champion of the World Boxing Organization (WBO), Argentine star Omar Narvaez, on Saturday December 15th at the Hilton Garden Inn Hotel & Casino of San Miguel de Tucuman, Argentina.

Quijano (15-2-1, 9 KOs), a native of Caguas and ranked number 11 by the WBO at super flyweight, has promised to return to Puerto Rico with the title of Narvaez (37-1-2, 20KOs). The Puerto Rican boxer had two wins in 2012 over Mexican Javier Gallo and veteran Filipino Juanito Rubillar to capture the WBO Latino super flyweight title.

“Actually the news reached me at this very moment, but I’ve been training hard for a long time because I had fights that fell through, so I’ve stayed in good shape to take this fight and we took the opportunity. Let’s make the best of this opportunity presented to us. Please know that I’m not going to be the prey. I’m getting ready and I want to bring that title to Puerto Rico,” said Quijano. “We are working hard and we’ll do the work to win this fight.”