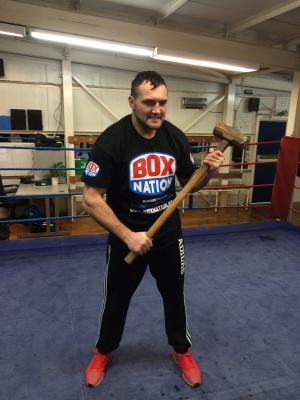 WBO International Heavyweight title challenger Christian Hammer says he’ll smash-up Tyson Fury this Saturday night at The O2 and leave him on the boxing scrapheap.
The hard-hitting German based Romanian, ranked number three in the world by the WBO, believes he will cause a huge upset and be the first man to knockout the Manchester giant.

Fury took the risky defence against Hammer even though he has a guaranteed shot against reigning WBO World Heavyweight king Wladimir Klitschko next.

Hammer says that Fury has made a big mistake.

“It’s showtime on Saturday night! I’m here in London nice and early to finish my training and everything has gone perfect in camp,”said Hammer.

“Tyson Fury will not go the distance against me he will be getting knocked-out clean and left to pick up the pieces after the fight.  He cannot hurt me with his punches because I’m in the best shape of my career for this fight and he will not last against me,”

“He has been put down before, he can be hit and hurt.  He has plenty of heart, but once I put him down he will stay down,”

“I’ve taken this fight because I know I can get the Klitschko world title fight when I beat him.  Klitschko is talking about fighting Fury, but he will be talking my name once a I knockout Fury.”