Provodnikov: Beating Alvarado Will Help Make Me a Star 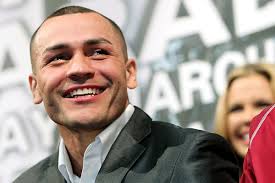 As reported by BoxingScene.com, junior welterweight contender Ruslan Provodnikov has agreed to terms to face WBO interim champion Mike Alvarado on October 19th in Denver, Colorado. Provodnikov is very confident that he can hand the Denver native his second professional loss.

“I will have to follow the game plan that my trainer Freddie Roach will set for me.  I think when our styles clash it will be a very exciting fight and an all out war,” Provodnikov predicted.

HBO pushed for the fight to take place the week after the October 12th Juan Manuel Marquez vs Timothy Bradley pay-per-view showdown. On the 19th, the Alvarado-Provodnikov fight would air following the replay of the Marquez-Bradley clash which would give the fight even more exposure. Provodnikov said that he’s very fortunate to be in the position that he is in now.

“I’m very lucky to be where I am now, and I’m glad that HBO is following through with the promises they made.  I think that they will never regret having a fighter with my style on their network, and I want to make sure I will only impress them further with each fight,” Provodnikov told BoxingScene.com.

Win or lose, Provodnikov feels that both fighters will be in a great position after the fight. He thinks that a victory will push him to superstar status in the United States and would have no problem giving Alvarado a rematch.

“I think that if I beat Mike Alvarado it will be a great victory for me because he is a great warrior and a big star in boxing today.  I will become a world champion and achieve having an even bigger fan base here in the United States!

“Becoming a WBO world champion will really mean a lot to me and it has been my goal throughout my career.  But again I think nobody loses from this fight, and we can always fight a rematch!” Provodnikov stated.