Genesis Servania To Headline ALA Card on March 1 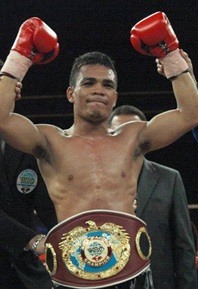 ALA Promotions president Michael Aldeguer told BoxingScene.com/Manila Standard that Servania, one of the most promising fighters in the famous ALA Gym will be joined by another undefeated fighter, WBO International super flyweight and OPBF champion “King” Arthur Villanueva.

Aldeguer who leaves for the US on Thursday to try and finalize details of WBO light flyweight champion Donnie Nietes’ next title defense with Top Rank promoter Bob Arum and to complete the setting up of an ALA Gym in San Diego, California  said he is “ working in a big name opponent for Servania and also  Villanueva.

Servania who is rated No. 3 by the WBO behind No.1 ranked Chris Avalos and Nonito “The Filipino Flash” Donaire who is at No. 2 has a record of 23-0 with 9 knockouts.

Aldeguer said Servania would join former flyweight title challenger Milan Melindo and train in the US and that he planned to have them spend a week at Freddie Roach’s Wild Card Gym in Los Angeles before training at the Top Rank Gym in Las Vegas.

The 22 year old is coming off an impressive 2nd round TKO of former WBA super flyweight champion Rafael “El Torito” Concepcion of Panama who had previously gone twelve rounds with Donaire in a fight where Concepcion came in four pounds over the limit last October 26, 2013.

Servania has a tough time against Japan’s Konusuke Tomiyama in Macau on a Top Rank card on July 27, 2013 when the Filipino won a 9th round technical decision because of a bloodied left eyelid caused by an accidental head-butt.

Servania was dropped twice in the opening round but came back to deck Tomiyama late in round one and once again in round three to win a close decision.

The 24 year old Villanueva who has a record of 24-0 with 14 knockouts won the vacant WBO International 115 pound title with a smashing 1st round knockout of Edgar   Martinez on October 26, 2013 after earlier winning the vacant WBO Asia Pacific title with a 4th round TKO of Arturo Badillo.

Villanueva captured the vacant Oriental Pacific Boxing Federation title with a close unanimous decision over Japan’s Taiki Ito on December 19, 2012. Significantly, Japanese judge Yuji Fukuchi scored the fight 113-112 for Villanueva who was down in rounds one and nine but also decked Ito in round four.