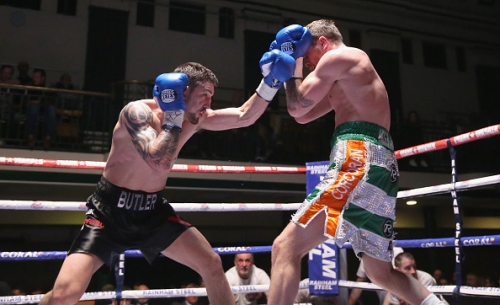 According to Boxing News 24, before the fight at the York Hall in Bethnal Green, Gary Corcoran weighed at 153.3 lbs while Danny Butler hit the scales slightly lighter at 153.2 lbs. The fight took place on Friday, March 25.

Corcoran declared before the action-packed show at York Hall that he always “takes things one fight at a time.” He added that he expected a tough fight and has a lot of respect for Danny Butler. However, he knew that he could beat Butler comfortably.

According to Boxing News Online, for his ferocious fighting style, Gary Corcoran is known as the “Hell Raiser.” The super-welterweight starfighter has won against his first 14 opponents including six knockouts.

According to Gary Corcoran, he has taken a lot of confidence from winning in fights against unbeaten Rick Godding and Rick Skelton last year. Now, Corcoran kicked off 2016 by claiming another victory at York Hall on Friday night.

Gary Corcoran dominated large parts of the bout and was on the front foot from the off. With scores of 100-89, 99-90 and 100-89, the fighter was able to secure a unanimous decision win. In the opening round, Corcoran came flying out his corner. “Hell Raiser” lived up to his name, peppering Butler with jabs and hooks. In the explosive start, both fighters were able to stand and trade at will.

Throughout the opening rounds, all-action Gary Corcoran refused to step back and chased down Butler. Danny Butler landed some strong combinations of his own, but in the seventh round, the fight began to swing in Gary Corcoran’s favor. His impressive hand speed had Danny Butler in trouble. Throughout the seventh round, Butler was pinned up against the ropes and took a tumble out of the ring.

On his journey to a world title, the unbeaten 25-year-old boxer wants to win against as many rivals as possible. Now, he wants to take on British and Commonwealth Champion Liam Williams.

Wembley’s Gary Corcoran declared that there are a lot of exciting fights to be made since “the super-welterweight division is bursting with talent.” The planned fight with Liam Williams will be a massive one, but Corcoran added that he is confident that he could beat him.