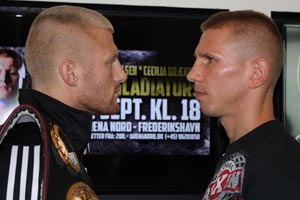 Middleweight Patrick “The Machine” Majewski (21-1, 13 KO) has two more days to get ready for his matchup with the WBA intercontinental beltholder Patrick Nielsen (19-0, 9 KO) at the Nordic Fight Night on September 7. The stakes have been raised, as the promoters, Global Boxing from North Bergen (NJ) and Germany’s Sauerland Event, decided to have their fighters compete for the both WBA and WBO intercontinental belts.

“This is a chance for me to move up in the WBO and WBA rankings and I can’t miss it. I believe it will be a competitive fight and I respect my opponent, but I am confident I will be the one taking both belts home,” said Majewski. Both fighters had a chance see each other during the first press conference at Crowne Plaza Towers in Copenhagen.