MELINDO IS FIT AND READY TO GO 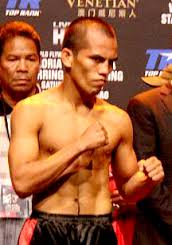 Undefeated Milan Melindo, mandatory challenger to WBO/WBA flyweight champion Juan Francisco Estrada is fit and ready to go in their title fight scheduled at the Cotai Arena of the Venetian Resort Hotel and Casino in Macau on Saturday in an exciting fight card to be telecast by ABS-CBN on Sunday at 10:15 a.m, over Channel 2 with a replay on Studio 23 and global coverage over The Filipino Channel, TFC.

ALA Gym head trainer Edito “Ala” Villamor told the Manila Standard from Macau that Melindo is “ready na ready” after some light training in which he “did some jogging, shadow boxing and worked on the punch-mitts.”

Villamor said they also “lectured on the strategy” for the fight which is expected to be a tough one against Estrada who won the title from Brian Viloria last April 6 at the same arena, coming on strong in the championship rounds to clinch the victory.

Villamor said Melindo has been training harder than ever in his two-year quest for the world title and knows he is in for a hard fight.

He said the 25 year old Melindo who has a record of 29-0 with 12 knockouts “is in great shape, his conditioning is good and he’s ready to get the title.” The 23 year old Estrada who will be making his first title defense and has a record of 24-2 with 18 knockouts also had a light workout last night at the Venetian Hotel and looked good.