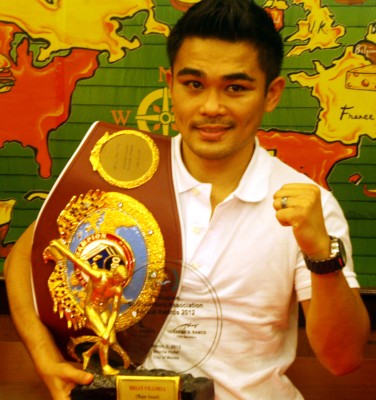 The Filipinos in the undercard are WBO No. 1 flyweight contender Milan Melindo and the highly-touted Peñalosa brothers Dodie Boy Jr. and Dave. Melindo, 25, puts his unblemished record of 28-0, with 11 KOs, on the line against Indonesia’s Tommy Seran whose mark is 23-1, with 14 KOs. Dodie Boy Jr. faces Thailand’s Ngaotawan Sithsaitong while Dave takes on another Thai Cheroenchai Sithsaitong. Dodie Boy Jr. has a 10-0 record, with 10 KOs, and Dave is 5-0, with 3 KOs.

Zou, 22, will make his first appearance as a pro against Mexico’s Eleazar Valenzuela in a four-rounder. The Chinese flyweight hotshot competed in three Olympics, claiming the bronze in 2004 and the gold in 2008 and 2012. He also captured the gold at the World Championships in 2005 and 2007.

Vazquez Jr., engages Japan’s Yasutaka Ishimoto in a 12-round bout for the WBO International superbantamweight crown. The Puerto Rican is remembered by Filipino fans for knocking out Marvin Sonsona in February 2010 and losing to Nonito Donaire Jr. by split decision last year. Ishimoto, 31, has won his last two outings, both by KO, and has a 21-6 record, with five KOs, compared to Vazquez Jr.’s 22-2-1, with 19 KOs.

Martirosyan, 26, trains with Freddie Roach at the Wild Card Gym in Los Angeles and is coming off a ninth round technical draw with Cuba’s Erislandy Lara in a WBC lightmiddleweight title eliminator in Las Vegas last November. The Armenian has a 32-0-1 record, with 20 KOs. He battles Argentina’s Javier Francisco (La Bestia) Maciel in what could be the show stealer in Macau. Maciel, 28, packs a 25-2 record, with 18 KOs, 10 in the first round. He has won his last seven outings, six by KO and four in the opening canto.

Magdaleno, 26, will attempt to dethrone WBO superfeatherweight champion Roman (Rocky) Martinez in a 12-rounder. Magdaleno has a 23-0 record, with 9 KOs, while Martinez’s mark is 26-1-2, with 16 KOs. Magdaleno is promoted by Top Rank and last year, wiped out his opponents Fernando Beltran and Antonio Davis inside the distance. Martinez, 30, will make the second defense of the crown he wrested from Miguel Beltran by split decision last September. In his first title defense, Martinez was held to a draw by Juan Carlos Burgos.

Top Rank and Mexico’s Zanfer Promotions are conspiring to bring professional boxing on the big stage in Macau with Azteca 7 “La Casa del Boxeo” beaming the fights to Mexico. Zanfer’s Estrada will try to snap Viloria’s streak of six straight wins and use his youth – he is 10 years younger – to wear down the Hawaiian Punch. Viloria, 32, has beaten his last four Mexican opponents from Julio Cesar Miranda to Giovani Segura to Omar Nino Romero to Hernan (Tyson) Marquez and intends to add Estrada to his hit list.

Viloria’s Los Angeles-based manager Gary Gittelsohn said he’s hoping Filipino fans turn out for the card in Macau. “We’re very excited about Brian’s next fight and the opportunity to headline the event in Macau,” said Gittelsohn. “Bob Arum is making a strong push into Macau principally because of the huge and growing interest in boxing by the Chinese. In that regard, the accomplished Chinese amateur Zou Shiming will make his professional debut on the card.”

Gittelsohn said Viloria and Zou are training together at the Wild Card Gym. “They’ve become friends,” he continued. “Brian will be defending his titles against the very tough Mexican challenger Juan Francisco Estrada who fought the talented Roman Gonzalez in the undercard of Brian’s unification victory over Tyson Marquez. We were all impressed with Estrada who gave Gonzalez all he could take in an extremely competitive contest.”

Gittelsohn said because of Macau’s proximity to the Philippines, he expects a horde of Filipino fans to show up at the Venetian to cheer for Viloria, Melindo and the Penalosa brothers. “We hope to have a substantial Filipino presence supporting Brian and the Filipinos in the undercard,” he said. “Brian is training very hard and takes nothing for granted. He promises to be at the top of his game for the fight because he knows from experience that every opponent wants what Brian has.”