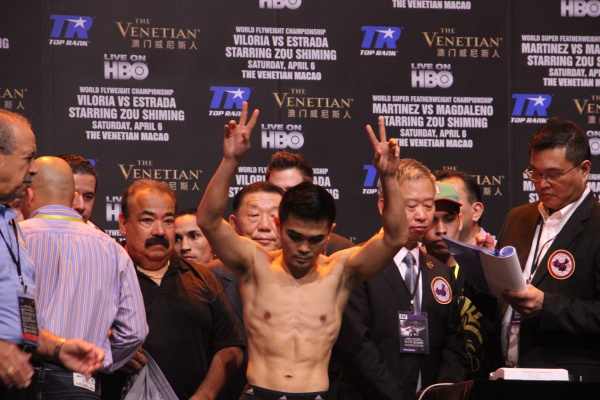 By: Abac Cordero (The Phillipine Star) –

MACAU – Brian Viloria comfortably made the weight and is all set to defend his WBO and WBA flyweight titles against Mexican Juan Francisco Estrada at the Cotai Arena of The Venetian Hotel here tonight.

Viloria gently tipped the scales and gazed at its electronic reading. He came in at 111.3 while his opponent weighed in at 112 pounds flat for their 12-round fight scheduled to start a little past 10.

The Filipino champion got off the scales as quickly as he could, without flexing his muscles. He stood face-to-face with Estrada for a couple of seconds then turned away, grabbed a bottle of some energy drink and left the stage.

Estrada stood a shade taller than Viloria, and proudly wore a Mexican hat after weighing in. He faced the cameras and looked dangerous as he showed off his wide body.

Viloria, 32, is putting everything at stake in this fight – his titles and perhaps even his future. After knocking out Hernan “Tyson” Marquez last November, he became the first unified flyweight champion since 1965.

Estrada was only 10 years old when Viloria competed in the 2000 Sydney Olympics and is here for all the marbles. He’s lucky to get a shot at Viloria after losing a 12-round battle with Roman Gonzales for the light-flyweight title last November.

Viloria will make sure he leaves this gambling paradise with his belts.

“I’m not going to give up this championship that easy,” he said.

“I fought my way tooth and nail to get to this point. There’s a lot more ways to go. There are bigger and better things ahead. I don’t know how bigger and better it can get after this but I feel I’m on the right track and I want to stay on this track,” Viloria added.

The reigning champion plans to get off to a fast start and see what happens along the way. He added that he’s ready to go the distance against the 22-year-old Mexican.

“I want to use all my tools. It’s all about being able to adjust. We’ll see. That’s always my plan – to start strong and adjust accordingly. I don’t want to fight a one-dimensional fight. My stamina is there. I’ve been going 10 or 12 rounds (in training) without skipping a heartbeat,” he said.

“I will give my all inside the ring as always. I’m excited,” said Estrada the other day, adding that he’s now more comfortable fighting in the 112 lb division that he was before when he lost a close fight to Gonzales.

Viloria trained more than two months at the Wild Card Gym in Los Angeles, under Filipino Marvin Sonsona and the guidance of Freddie Roach. To man his corner for the fight are old hand Ruben Gomez and Sonsona

“Freddie just gives his recommendations. He didn’t work with me as much as Marvin did but we worked as a team. It’s not more about teaching but reminding you how to go about, and use the tools that I have.

Three other Filipinos will see action in this “Fists of Gold” card presented by Top Rank. They are the Peñalosa brothers, Dave and Dodie Boy Jr., and Milan Melindo.

Milan Melindo of the famed ALA Boxing Club of Cebu, will climb the ring against Indonesia’s Tommy Seran for 10 rounds in the flyweight division.