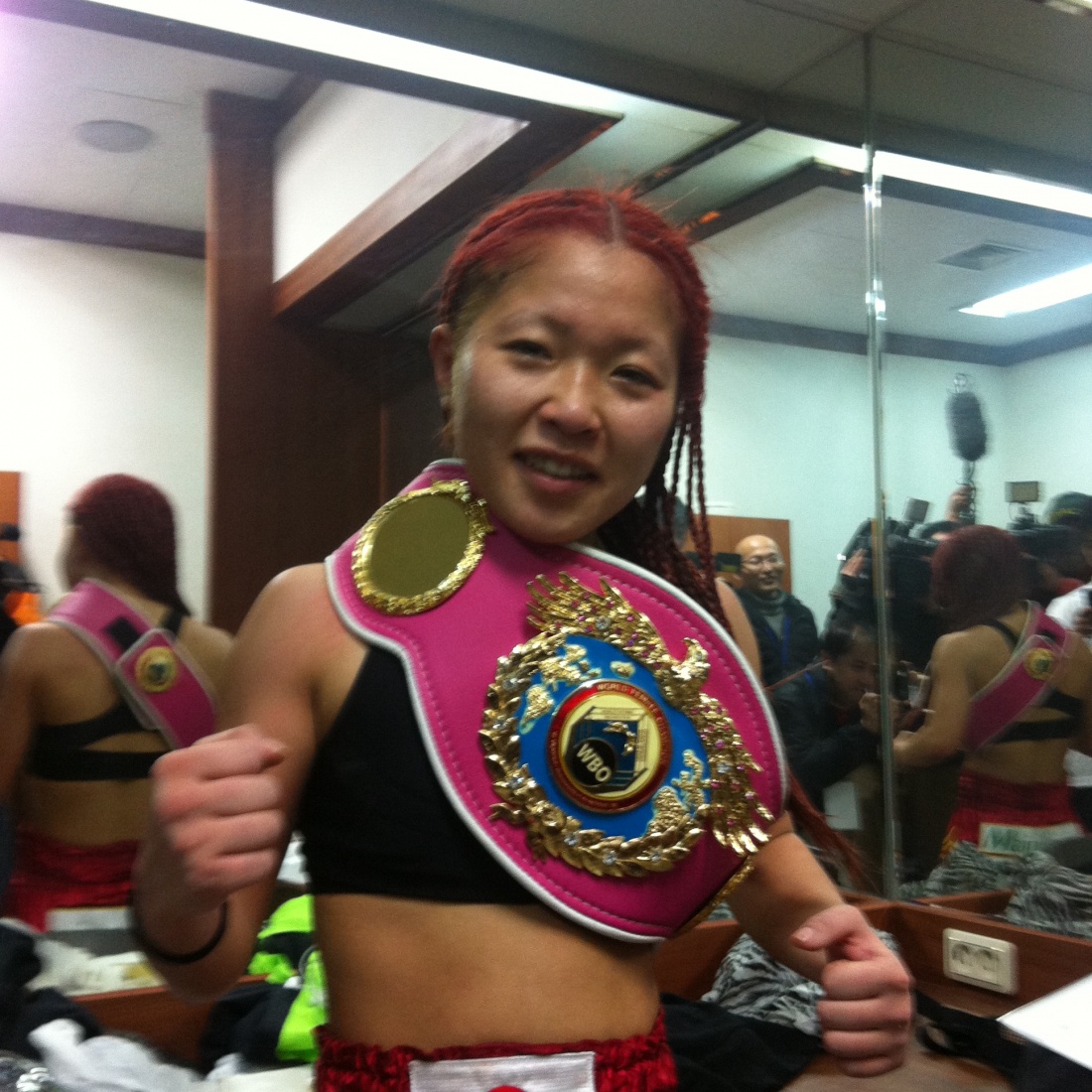 Hong, who won the WBO title in June, 2012, was coming off her second defense in August, 2013, a highly controversial split decision win over Kyoto, Japan-based Mari Ando, who went on to become the WBC Minimumweight champion in December of last year. Although Yamada made her pro boxing debut at age 17, a mere six weeks before Hong won the WBO title, she started kickboxing and karate as an elementary school student, and had amassed a pro kickboxing record of 5-0-2. When reminded after the weigh-in about their compatriot’s unfavorable decision loss in August, Yamada’s manager, Masahiko Kumeta, expressed his confidence, stating that his charge had trained and prepared to her best ability, and that they had come to knock Hong out.

This was apparent from the opening bell, as Yamada employed a persistent body attack that weakened Hong over the first half of the bout. Through round after round of trench warfare, the champion scrapped valiantly, but the challenger’s superior infighting skills gave her the upper hand. Yamada increased her work rate in the later rounds, throwing full-force hooks to the head that had Hong holding on for dear life. Not expecting to win a decision on the former champion’s home turf, Yamada burst into tears when the decision was announced. Unlike those of certain other boxing organizations, it appears that the representatives of the WBO are making a concerted effort to eliminate hometown decisions in Asia. Hopefully the other organizations will follow their lead. After the bout, an insider from Hong’s camp revealed that the former champ had sustained an injury to her right eye in round two, which negatively affected her performance thereafter. With this victory, Yamada became the first Japanese WBO female champion, and the first woman from Kyushu to win a world title. Although he had taken time off from managing his Korean Barbeque restaurant in Osaka to come and support Su-Yun Hong, former WBC Super Flyweight champion Masamori Tokuyama (aka Chang-Soo Hong) stopped by Yamada’s dressing room to offer his congratulations. Yamada’s promoter, Takao Mihashi, commented that since Yamada is still young, their goal is for her to become a world champion in three weight classes. Mako Yamada, whose older sister Saki is also a formidable professional boxer (could they become the Japanese “Klitschko” sisters?), says that she will continue to work her part-time job as an assistant in a beauty salon while training hard to defend her newly acquired belt.