Despite over forty years of showcasing live professional boxing in “America’s Finest City” of San Diego, Bobby D. Presents, led by California boxing hall of fame promoter Bobby DePhilippis, still had a night of firsts last Friday night. In the main event of their last show of the year, billed as “Dangerous Divas II”, the popular Tijuana Kenia Enriquez (13-0, 6KO) put on a masterful display of power, speed and technique to capture the vacant WBO female flyweight title with a complete shutout of the much more experienced Ana “La Bronca” Arrazola (21-11-2, 13KO) of Mexico City. The night marked the first world title fight in San Diego in nearly ten years as well as the first female world title fight in the history of the city. Enriquez also set her mark by becoming the second youngest active female champion in boxing as well as the first Mexican woman to capture a WBO title strap. The night was co-promoted in association with Fernando Beltran’s Zanfer Promotions.

The just recently turned twenty-one year old Enriquez closed out a successful year with her fifth win of the year. After stopping Selene Lopez in one round in her native Tijuana last January, Enriquez defeated Noemi Bosques via a unanimous decision in her U.S. debut a month later. In April Enriquez stopped former two-time world champion Jolene Blackshear in seven to capture the NABF 108lb title and last September shutout the tough Mayela “Cobrita” Perez for eight rounds.

It was no secret the thirty-four year old southpaw Arrazola was the more experienced one with more knockouts than Kenia had fights. Arrazola held the fringe WBF junior flyweight title in 2013 and had challenged for world title before including against Yesica Bopp twice and Suzy Kentikian. Earlier this year she traveled to Japan for a shot at the IBF junior flyweight but came up short against Naoko Shibata. Arrazola was coming off a ten round unanimous decision over Estefania Fonseca back in October.

From the opening bell Enriquez made her intentions known as she welcomed to Arrazola to San Diego, the first time Arrazola was fighting on American soil after forays to Argentina, Germany and South Korea, with a hard right hand flush to the face that snapped the Mexico City fighter’s head back. That exact punch would turn out to be Enriquez’s weapon of choice through out the night.

Despite scheduled for ten rounds for the first time in her career, Enriquez wanted to finish things early and still in the first round she landed a hard left hook to begin a flurry that seemed to surprise Arrazola who perhaps expected a more complacent pace.

Kenia continued to score the straight right hand but changed it up to the body that would double Arrazola over every time it landed. Arrazola’s face might have had a homing device for Enriquez powerful straight right hand, as it never seemed to miss through the bout.

The Tijuana’s fighter defense turned out to be as good as her offense as she easily slipped Arrazola’s left and then countered with a multi-punch combination including a precise uppercut.

In the sixth Kenia went for the kill as she ran across the ring at the bell and tried to pin Arrazola against the ropes with a flurry of punches. Arrazola’s experience was enough for her to react quickly and use her lateral movement to get out of harm’s way but not before receiving a couple of flush punches to the face.

After a slower paced seventh and with the crowd egging her on, Kenia tried for the knockout again in the eighth but Arrazola besides using everything in her thirty-four bout, eight year career experience proved to have granite chin as she was able to survive the onslaught.

Yet another right hand landed early in the ninth but this one sent Arrazola reeling against the ropes but was able to counter well and make Enriquez think twice as the young champion tried to finish her off. Kenia never left off the gas, including in the tenth and final round, but Arrazola proved to be too tough and wise to get stopped.

All three judges, Tony Crebs, Alejandro Rochin and Pat Russell, had it a landslide victory for Enriquez with scores of 100-90, 100-90 and 100-89 respectively.

“She was very smart and experienced, every time I thought I had her and would be able to stop the fight, she would use something different to get away, I learned a lot from this fight, “ Enriquez said seconds after winning the title. “I am ready for the best of the world. I would like to either unify the division or go down to my natural weight of 108 pounds and win a title there. I might even try to go down to straw weight. I don’t think I would have a problem with that. I have to talk to my team and especially to my promoter, Bobby DePhilippis, to see what is next.” 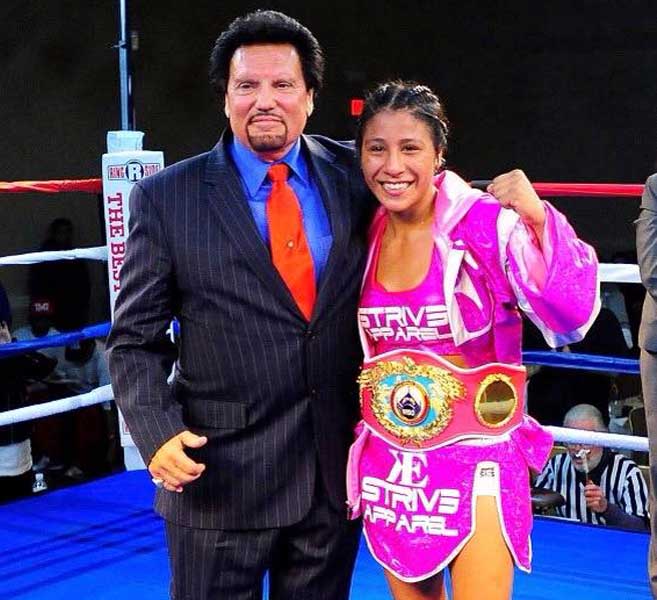 A packed crowd coming from Mexico and the U.S. saw the smiling Enriquez (13-0, 6 Kos) perform impressively at the Crowne Plaza Hotel. Arrazola (21-11-2, 13 Kos), from Mexico City, never could get a foothold in the 10 round fight.

“It was a very complicated fight,” said Enriquez after the fight. “She would never stay in front of me.”

With the opening bell Enriquez attacked with powerful punches that seemed to startle Arrazola with their ferocity. It was clear that the former minimum weight world champion expected a more placid and deliberate fight. It was deliberate in only that Enriquez was looking for a knockout in every round.

The crowd on one side of the large hotel reception room shouted intensely every single round with instructions and encouragement. But the cheers were not needed. Enriquez was intent on proving her superiority and that she was superior in speed, power and agility. Arrazola felt the early blows and seemed surprised by the power. For the next nine rounds the Mexico City boxer seemed resigned to surviving, not winning the fight.

Arrazola never stood in one spot and never allowed the Tijuana fighter to pin her against the ropes. The Mexico City boxer always circled and though she never initiated an attack, she also never allowed Enriquez to put full power into her punches.

Though Enriquez smiled frequently in between rounds in her corner, she looked like a heat-seeking missile that would be satisfied with a knockout and nothing else. After five rounds of thorough domination she walked back to her corner with a smile but when the bell rang to begin the next round she slipped into another degree of intensity.

The blows came more frequently from Enriquez and from various angles in the sixth round. Arrazola used all of her technique and wisdom gained from more than 30 fights to fend off the fierce attack. She parried some of the blows and rolled with the punches to reduce the impact of the blistering right hands and hooks. It was the most intense attack of the night. Enriquez would have gained a knockout if the round was three minutes instead of two minutes. But the round ended and Arrazola had survived.

Enriquez softened her attack in the seventh then resumed another fierce attack in round eight. Though not as intense, it was still strong and Arrazola seemed surprised that Enriquez still had the energy. The Tijuana boxer seemed locked in and never seemed to tire.

In the ninth round Enriquez moved in for a knockout again with laser rights that looked beautiful in their speed and technique. A few shots to the body got a reaction from Arrazola, who was determined to not go down. The southpaw would not allow Enriquez to pin her on the ropes and would not stand in front of her for more than 10 seconds. It was a wise plan.

Though Arrazola had not been able to mount an attack at any point in the fight, she did show what could be done to survive. Remarkably the Mexico City boxer never held in the fight. Instead, she parried and circled continuously without running. It was a solid plan but she could never get a bead on Enriquez.

The final round saw Enriquez rip a right hand immediately after shaking Arrazola’s hand with a smile. Friend or no friend, the Tijuana fighter was looking for a knockout win and was taking no prisoners. When the round ended it was clear that Enriquez was the victor.

“It was the most difficult fight of my life,” said Enriquez. “Whenever I tried to end the fight she would move or do something to get away. But I expect to see this type of fight again in this level.”

Enriquez has also shown that she can bring crowds from both sides of the border.